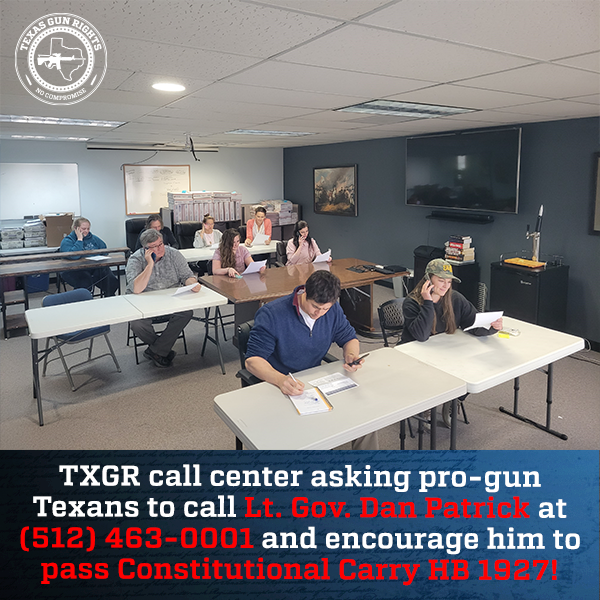 I’ve got an important update so please let me cut to the chase.

Constitutional Carry HB 1927 is scheduled for a hearing in the Texas Senate Special Committee on Constitutional Issues this Thursday!

With only 34 legislative days remaining, it is critical this bill not only gets voted out of committee but also out of the full Senate and onto Governor Abbott’s desk.

I can’t stress the importance of every single phone call.

In fact, the Senate taking up HB 1927 in committee this Thursday is PROOF your actions are working!

But thanks to the near-instantaneous onslaught of your phone calls, emails, and petitions, Patrick realized pro-gun Texans wouldn’t settle for anything less than TRUE Constitutional Carry.

In fact, Patrick quickly reversed course by referring HB 1927 to a friendly committee.

Now, HB 1927 is scheduled for a hearing in the Senate Special Committee on Constitutional Issues this Thursday at 9am.

Not only that, Committee Chairman Charles Schwertner has taken the lead as the Senate co-sponsor of HB 1927, which gives the bill very good chances.

But we must not let up on an ounce of pressure.

As the saying goes: “the squeaky wheel gets the grease.”

When it comes to Constitutional Carry, YOU are the squeaky wheel!

Without your continued pressure, Lt. Governor Patrick is all but certain to kill this critical pro-gun bill.

Remember, it was ONLY because of your continued pressure that Patrick wizened up and allowed HB 1927 to be referred to a friendly committee.

If we let up now, Constitutional Carry may never make it to the Senate Floor at all.

After HB 1927 received such strong bipartisan support in the Texas House of Representatives, there is absolutely NO REASON Republican Senators should have weak knees or try opposing the bill!

Even better, we teamed up with Lt. Col. Allen West — Chairman of the Republican Party of Texas — to continue pouring the pressure on Gov. Abbott, Lt. Gov. Dan Patrick, and the Texas Senate to pass HB 1927.

For the first time ever, we may finally be at a tipping point…

That’s why we MUST double down on encouraging Lt. Governor Dan Patrick and the Senate to quickly pass HB 1927: no compromise. No delays!