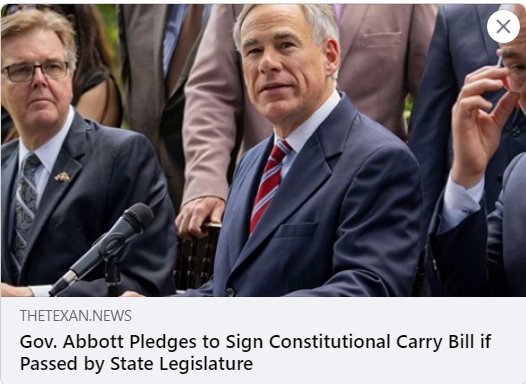 Your pressure is working!

Governor Greg Abbott has finally broken his silence on Constitutional Carry in Texas.

On a radio interview Tuesday, Abbott stated that he supported Constitutional Carry and would sign HB 1927 if sent to his desk.

Clearly, Abbott is feeling the heat from Texans and sees there is no room for Republican legislators who don’t support Constitutional Carry.

Constitutional Carry is a simple concept: if you can legally possess a gun, you should be able to carry it without a government permission slip.

HB 1927, the Texas Constitutional Carry bill, passed through the Texas House and is now in the Senate, where Lt. Governor Dan Patrick attempted to stall the bill, saying that it did not have enough support from Republican Senators to pass.

But thanks to the massive outcry from Texas gun owners like you, HB 1927 was moved forward, and Republican Senators one after another are publicly pledging their support for the bill.

But there are still some Republican Senators refusing to support Constitutional Carry, and they could kill the best chance Texas has ever had of passing this crucial legislation if they do not reverse course.

You see, for a bill to be heard on the Senate floor, eighteen senators must consent to it being heard.

That is the exact number of Republican Senators.

That is why I need you to contact Lt. Governor Dan Patrick and your Senator telling them: “Support HB 1927 now! No anti-gun amendments!”

HB 1927 is set for a hearing tomorrow in the Senate Special Committee on Constitutional Issues.

This committee is stacked with Republicans who have publically expressed their support for HB 1927, so there is no excuse not to move Constitutional Carry out of committee immediately.

But the job isn’t over yet.

It is more important than ever to stay on the lookout for attempts by the anti-gun establishment to tank Constitutional Carry by watering down the bill with compromise amendments.

So please, contact your senators and make sure you tell them, “Pass HB 1927 with no anti-gun amendments!”

After years fighting for Constitutional Carry in Texas, we are very close to seeing the efforts of you and gun owners all over the state pay off.

That is why we must stay more vigilant than ever and make sure Texas Senators know that they MUST support Constitutional Carry or face the wrath of pro-gun voters come election season.

Twenty other states already have Constitutional Carry, including neighboring Oklahoma and Arkansas. And Louisiana could soon join the list!

This would have Texas almost entirely surrounded by Constitutional Carry states, while the Lone Star State lags behind.

I am counting on you.