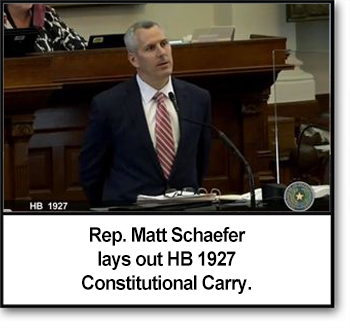 Constitutional Carry has finally been voted out of the Texas House 84-56!

It will now move to the Texas Senate.

HB 1927 originally was only a limited “permitless carry” bill that would still require a permit to carry in many situations.

But thanks to your hard work, pro-gun amendments were added to make HB 1927 Constitutional Carry!

These amendments were crucial to fixing HB 1927 so otherwise law-abiding citizens wouldn’t accidentally run afoul of the law.

In addition to these, two other TXGR-backed criminal justice amendments passed.

One expunges prior convictions of otherwise legal gun owners carrying without a permit, and the other guarantees gun owners cannot be detained for simply carrying a gun.

Unfortunately, some good amendments were not accepted by the House.

Representative Jeff Cason offered an amendment guaranteeing military-aged adults 18 through 20 equal right to carry without a permit, but because this amendment was not accepted, HB 1927 will only apply to Texans 21 and older.

Representative Kyle Biedermann — who led the way for Constitutional Carry with his own House Bill 1238 — offered an amendment cleaning up Campus Carry by ensuring Texans on college campuses would also not be required by law to have a permit in order to carry.

Thankfully, even without these two amendments, Texas’ Constitutional Carry law would be one of the best in the nation if HB 1927 passes the Senate in its current form.

Now that the bill is headed to the Texas Senate, rumors in the capitol suggest Lt. Governor Dan Patrick has been working behind the scenes to kill HB 1297 BEFORE it was voted out of the House.

In fact, capitol insiders say he was behind the press conference by big-city law enforcement top brass and leftist police chiefs who attacked HB 1927.

Worse, rumors also suggest Patrick had Senators ON THE FLOOR trying to convince lawmakers to not add any pro—gun amendments to the bill.

Seven Democrats bucked their party and voted for Constitutional Carry in the Texas House, so there is absolutely no excuse any Republican in the Texas Senate has to oppose this pro-gun measure.

But we are closer to making Texas the next Constitutional Carry state than we have ever been, and we would not be here without the constant pressure and financial support of our members and supporters.