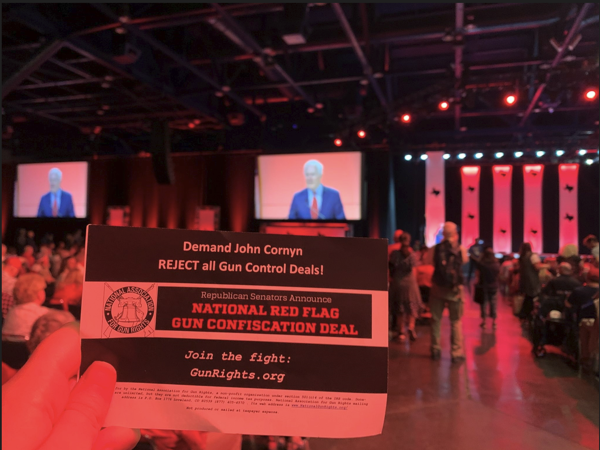 Riots, torched buildings, and looting hit every major city in America and even spilled outside of them.

All of this was perpetrated by mobs of leftist activists and opportunistic criminals.

But according to Texas Senator John Cornyn, the real mob is made up of gun owners like you.

Unfortunately for John Cornyn, Texas Gun Rights was present at the GOP Convention distributing flyers to inform attendees of their Senator’s actions before he took the stage.

The crowd of Republican delegates and attendees exploded with boos as John Cornyn took the stage. I heard (and joined in) chants of “No Red Flags” and “Traitor” all around the room.

Cornyn tried his best to console the Republicans gathered there by promising that there would be “no additional restrictions on legal gun owners.”

That is a blatant lie. Just look at some of the gross infringements included in Cornyn’s compromise deal with Democrats:

Red Flag has been a losing issue in Texas thanks to the grassroots pressure generated by Patriots like you. This proposal would take your tax dollars and use them to effectively bribe politicians into passing Red Flag. This is the same strategy the feds have used to pressure states into changing the legal drinking age among other things. It works.

“Red Flag” laws call for firearms to be forcibly confiscated from law-abiding Americans without due process, based on accusations – without any proof – from disgruntled family members, neighbors, government officials, and/or current or ex-romantic partners, or roommates.

Judges are able to issue orders authorizing law enforcement, including SWAT teams, to immediately seize firearms from the subject of the order without notification or right to an attorney.

Stripping gun rights from men and women for simply having a toxic relationship or bad breakup.

By changing the definition of what constitutes the need for an FFL in order to sell firearms, this proposal would essentially ban private firearms sales.

You can vote, you can go to war, and you definitely can pay taxes but exercising your Second Amendment rights? Forget about it.

Senator Cornyn must feel the heat for his anti-gun actions if gun owners are to stand a chance at defeating this nation altering legislation.

Don’t let the radical left and traitorous RINOs steal your right and the rights of future Texans.

Take a stand with Texas Gun Rights by telling Cornyn “No Gun Control Deals!” and supporting our efforts with a monetary gift.

I am pulling out all the stops to mobilize Texans to hold anti-gun politicians like Cornyn accountable – just like we did at the GOP convention last week.

With your support, I want to amplify the voices of Texas gun owners so loud they bust the eardrums of the suits in D.C.

Will you fund the fight against gun control deals today?