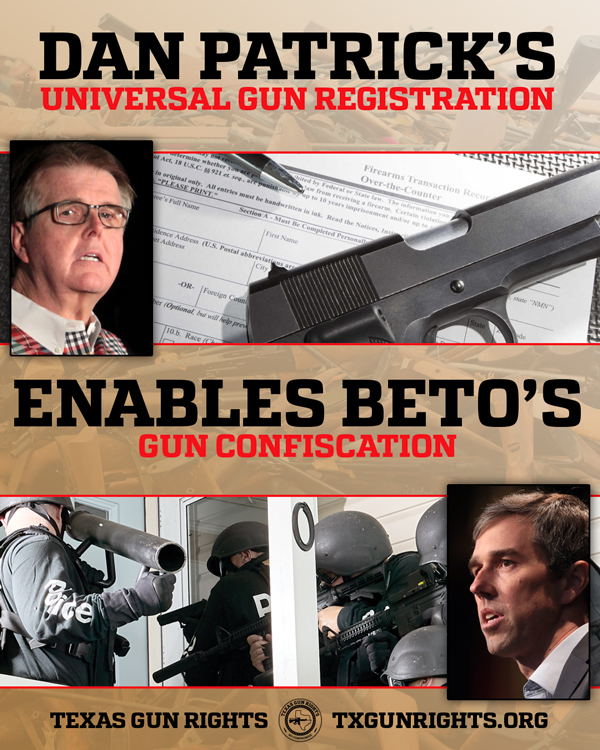 Lt. Governor Dan Patrick is digging his heels in with support of Universal Gun Registration.

This legislation would ban the private sale of firearms and funnel every firearms purchase and transfer through the Brady-NICS gun registry.

This Obama-era scheme was defeated by gun owners in 2013, but now Republicans like Dan Patrick are scurrying to revive it.

As you and I know, registration is just the FIRST step toward outright confiscation.

And if you’ve been paying attention to the recent Democrat debates, gun confiscation is at the top of their list…

That’s why I need you to sign your “NO Gun Control Mandate” to your lawmakers right away.

And Patrick’s support is meant to give weak-kneed Republicans cover for passing gun control nationwide.

I can’t believe it either.

If that’s not bad enough, capitol insiders in Austin suggest Governor Abbott is going to call a special session of the legislature to take up gun control!

“Word on the street is that Greg Abbott and Dan Patrick are preparing for a special session AFTER the March Republican primary. That way voters can’t hold weak-kneed “Republicans” accountable for passing the gun control legislation they will propose. Pathetic!”

And these anti-gun committee hearings are scheduled to take place across the state until May.

Reinforcing concerns of a special session AFTER the March primary.

With Dan Patrick — our state’s second most powerful politician — advocating for Universal Gun Registration, I’m afraid of the recommendations the committee will provide.

So please sign your “NO Gun Control Mandate” to your lawmakers RIGHT AWAY.

It seems we are in the midst of a never-ending gun control nightmare.

Republicans in Austin and Washington are starting to believe the lie that if the Gun Control Lobby is given an inch they won’t take a mile.

But we know how the anti-gunners work, and we know that if Republicans cave on Universal Gun Registration, the door will be left wide open for untold gun confiscation laws down the road.

Just like Beto and anti-gun Democrats running for President want.

And it’s the perfect scheme…

Get Republicans to do the dirty work of passing gun registration so Democrats can swoop in later and “round ‘em up.”