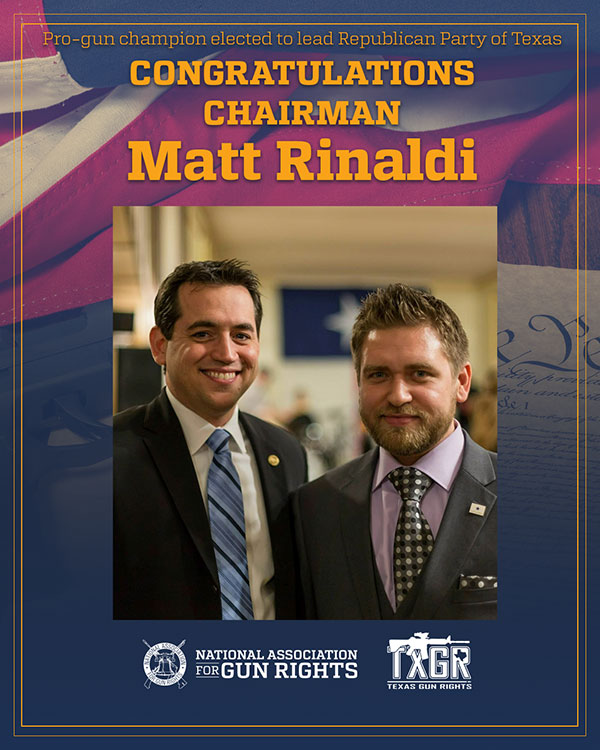 Rinaldi is replacing outgoing Chair, LT. Col. Allen West, who partnered with TXGR for the Constitutional Carry fight in Texas.

This move could be a good sign for things to come in Texas, as Rinaldi fought for several pro-gun issues while he was a State Representative, including open carry and Constitutional Carry.

Not only that, but it was Matt Rinaldi who authored Texas’ “Church Carry” law, which ultimately saved many parishioners at the White Settlement Church of Christ just a few short years ago.

But as we know, Rinaldi’s election will not be enough to reign in anti-gun Republicans determined to compromise with anti-gun Democrats.

To have a strong voice in the Texas Legislature next session, pro-gun Texans must continue sending a loud message to politicians that they expect them to defend and restore the Second Amendment… and we must continue shining a light on legislators who dare try to compromise your rights away!

And with the huge Constitutional Carry win, you can bet that deep-pocketed Democrats from across the country have their targets fixed on Texas.

With anti-gunners like Beto O’Rourke and Matthew McConaughey plotting a run for Governor, you can bet Texas’ “gun freedom” will be at risk.

But the good news is Rinaldi’s chairmanship is further proof that gun rights continue to be a winning issue in Texas.

So candidates must know that if they run as a “conservative Republican,” supporting gun rights are non-negotiable.

But it is not enough to hide behind bloated ratings from the establishment gun lobby without fighting.

All legislators and candidates are expected to stand publically against ALL gun control in Texas: NO COMPROMISE!

With elections around the corner, Texans will no doubt hear from many Republican candidates claiming to be “pro-Second Amendment,” but to secure more pro-gun wins in the Lone Star State, the wheat must be separated from the chaff.

That is why I am so thankful for TXGR supporters like you, Fellow Patriot.

Without your support, conservative Texans would be left defenseless against the onslaught of political spending from the likes of Michael Bloomberg and Texas would not be a Constitutional Carry state.

So please chip in $15 or even $5 to help TXGR keep fighting for your gun rights in Austin!

Texas is in a prime spot for more pro-gun wins — but ONLY if we hold politicians accountable for their stance on gun rights, regardless of party.