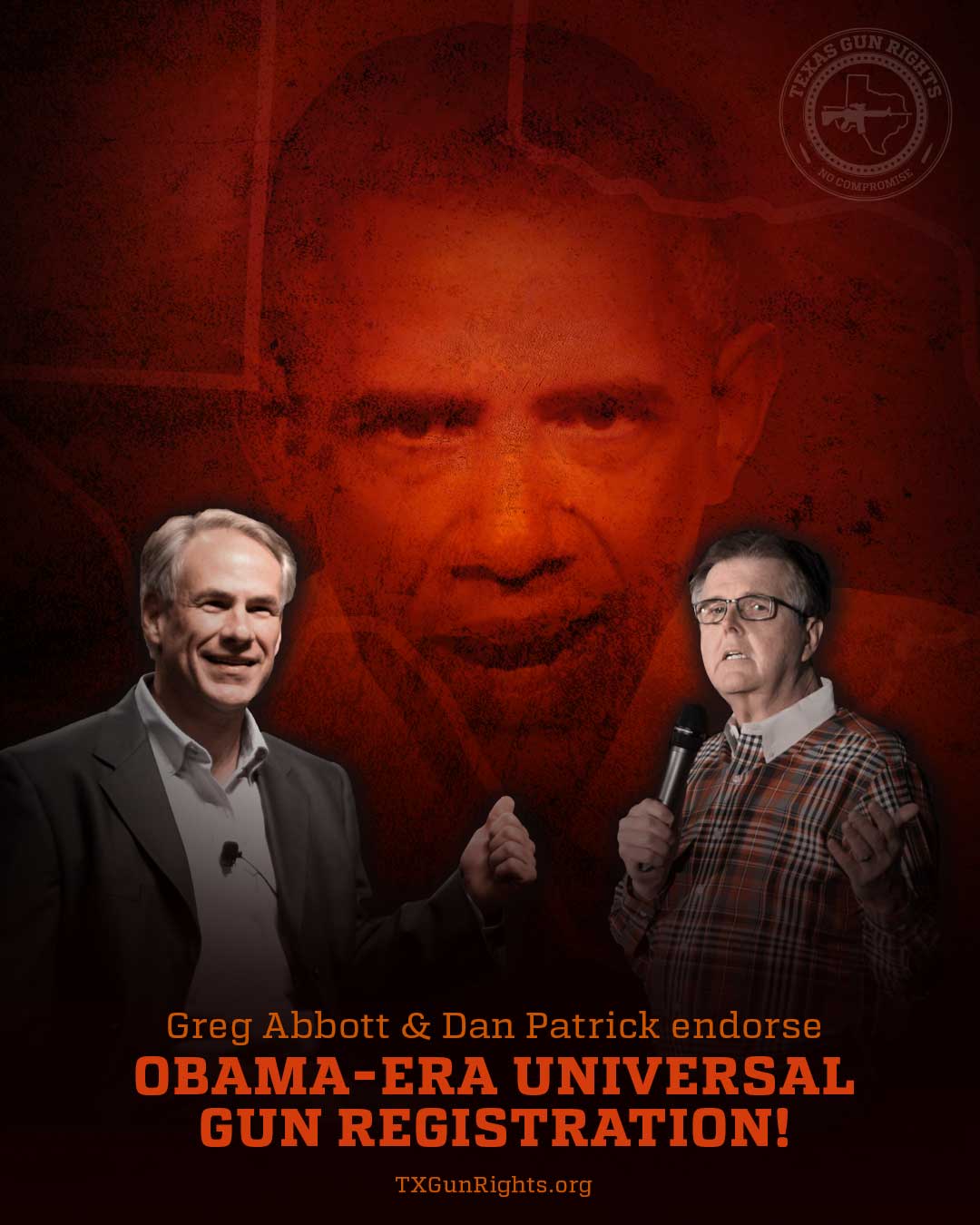 Kicking open the door to tyranny

Imagine waking to a loud banging on your front door in the middle of the night.

Suddenly, government agents burst through the door — demanding you turn over your legally-owned firearms.

You’ve received no notice and haven’t been charged with a crime.

But someone down the street doesn’t like your “pro-gun” bumper sticker, or an estranged family member can’t stand your conservative yard sign and decided you are a threat, so they called the cops.

That’s why it’s critical you sign your “No Gun Control Mandate” to your elected officials right away.

I know it may sound crazy, but gun control in Texas is a much closer reality than you may realize…

Following the recent tragedies in El Paso and Midland-Odessa, the Gun Control Lobby is hell-bent on forcing “Red Flag” Gun Confiscation, Universal Gun Registration, and a slew of other gun control laws on the Lone Star State.

And they’re getting help from unusual allies.

Our very own Republican U.S. Senator John Cornyn endorsed “Red Flag” Gun Confiscation — and Senator Ted Cruz said these laws should be a part of the discussion…as long as it includes due process.

You and I both know there is no due process and there is certainly no presumption of innocence.

Both of which are the bedrock of the American judicial system.

By relying solely on baseless accusations and anonymous complaints as “evidence,” “Red Flag” laws can be easily abused by violent ex-spouses, stalkers, or criminals who seek to disarm their potential victims.

Leaving women defenseless to protect themselves and their children.

Yet Governor Greg Abbott is placating the anti-gun hysteria by signaling support for “Red Flag Lite” — in the form of so-called “welfare checks.”

Sending law enforcement to your door to “talk” if a disgruntled neighbor or family member is concerned you legally purchased a firearm.

More recently, Governor Abbott declared the private sale of firearms between Texans as somehow akin to selling guns to terrorists.

Then Lt. Governor Dan Patrick declared war against gun owners by saying he will lead the Republican effort to pass Universal Gun Registration.

I wish it weren’t true.

All of these actions are being taken because they believe appeasing the anti-gun media will gain them favor with far-Left voters in 2020.

Yes, it’s as stupid as it sounds.

The mere thought of these Republican-led gun control proposals makes my stomach turn.

The fact is neither of these policies would’ve done anything to prevent the recent pure acts of evil in Texas and Ohio.

That’s why Texas Gun Rights is encouraging your elected officials at ALL levels of Government to oppose ALL gun control: NO COMPROMISE!

I hope you’ll join me by signing your “No Gun Control Mandate” to your lawmakers RIGHT AWAY.

Governor Abbott and our lawmakers should focus on allowing law-abiding Texans to be their own first line of defense — by passing pro-gun Constitutional Carry legislation.

With your continued support, Governor Abbott can still be pushed in the right direction.

And that pressure is exactly why both Governor Abbott and Lt. Governor Patrick are shying away from calls for outright “Red Flag” Gun Confiscation today.

So your continued support today is critical to defending the right to keep and bear arms in Texas.

Chris, it’s more important than ever to activate thousands more pro-gun Texans to continue lobbying their elected officials in defense of the Second Amendment.