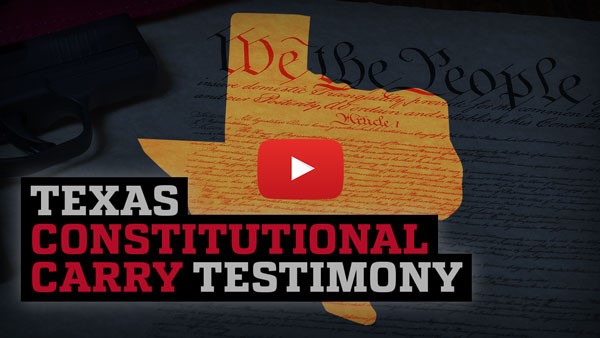 After waiting nearly 14 hours for Constitutional Carry to be heard, I delivered my testimony in favor of HB 1238 just before midnight last night!

You can watch my testimony from the committee below:

This marathon of a hearing lasted nearly 19 hours in total yesterday, and pro-gun voices far outnumbered the opposition.

But this comes as no surprise.

In fact, we delivered over 118,000 Constitutional Carry petitions to all 150 State Representatives yesterday from pro-gun Texans across the state.

The message was simple: make Texas the 19th Constitutional Carry state once and for all!

Constitutional Carry is a simple concept: if you can legally possess a handgun, you should be able to carry it to protect yourself and your loved ones. Period.

No begging for a government permission slip or paying expensive fees!

But in spite of Republicans holding legislative majorities in Texas for two decades, this pro-gun legislation has seen its demise for the past three legislative sessions.

Thanks to your consistent pressure over the years, lawmakers are starting to realize they MUST do something…or face the consequences when they seek re-election.

In fact, multiple Constitutional Carry and limited “permitless carry” bills have been filed in the Texas Legislature for the first time ever.

That’s why Texas Gun Rights is going all-out to ratchet up the pressure on your elected officials to make sure they only support TRUE Constitutional Carry in 2021.

And under Constitutional Carry, all law-abiding gun owners are treated equal under the law.

That means licenses shouldn’t grant special privileges: if you’re able to legally possess a firearm, you should be able to carry it in areas where someone with a License to Carry can carry it.

This prevents otherwise law-abiding citizens from accidentally running afoul of the law by carrying in places where they are prohibited.

With Constitutional Carry as law of the land in 18 states — including neighboring Oklahoma and Arkansas — there is NO reason Texas should not be #19.

But like anything else in politics, NOTHING will happen without a groundswell of support from folks like you across the state!

So if you haven’t already, please sign your Constitutional Carry petition to your lawmakers TODAY!

Once the bill passes out of the Texas House, we are planning to make a second delivery of petitions to your State Senator.

It is my hope that I come back with even more petitions than I delivered to State Representatives just yesterday.