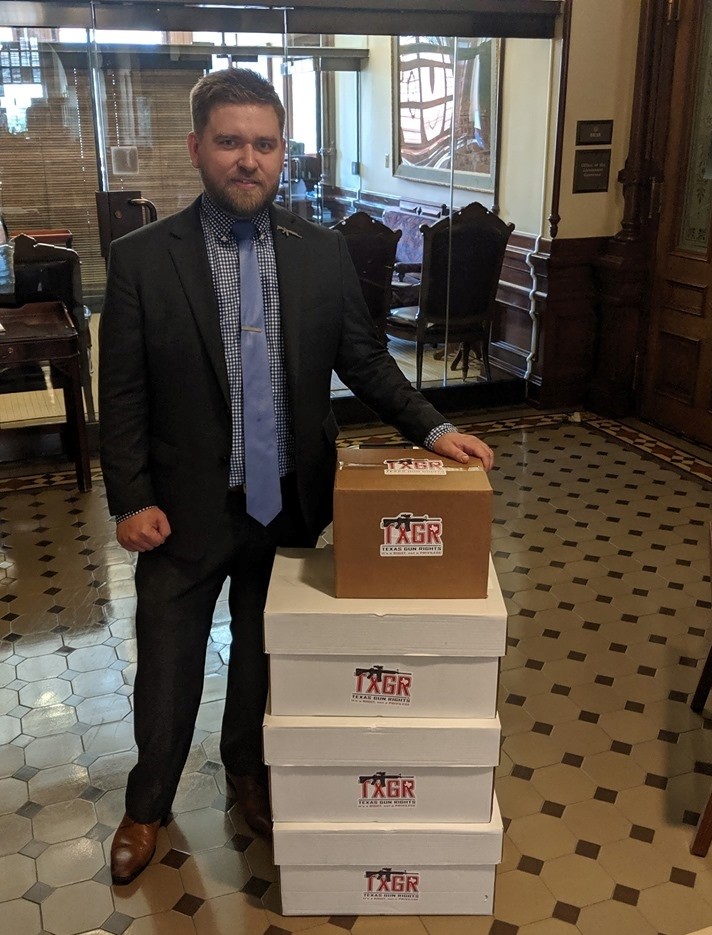 We won’t back down

One month has passed since the tragedy in Midland-Odessa.

And politicians are eagerly looking to cut a “deal” on gun control.

Even Republican Lt. Governor Dan Patrick is falling victim to the flawed “do something” mentality.

Like Patrick, weak-kneed politicians wrongly believe negotiating some of your gun rights away will somehow appease the gun grabbers — and make them go away.

And they expect you and me to sit down, shut up, and take it.

Good luck with that.

With a new gun control hearing coming up on October 10th in the Dallas area, we must send a resounding message to our lawmakers: No gun control, no compromise!

Please sign your “No Gun Control Mandate” RIGHT AWAY.

I was in Austin last week where I joined a “Second Amendment roundtable” hosted by Empower Texans.

If passed, so-called “Red Flag” Gun Confiscation legislation would allow government goons to seize every firearm you own with ZERO due process.

Then, of course, there is Universal Gun Registration — setting the table for confiscation.

Even worse, this policy would shepherd the names of all would-be gun purchasers into a federal database. A de facto registry.

Registration is a TOP priority for Bloomberg-funded “Moms Against Guns,” yet Republican Lt. Governor Dan Patrick is staking his political career on supporting it.

I’m sure you don’t need me to remind you registration is just the FIRST step toward outright confiscation.

As we’ve seen recently, anti-gun Democrats are revealing confiscation is one of their top desires.

Many other candidates echoed his sentiments.

Worse, political insiders report our very own Republican Governor Greg Abbott is flirting with the idea of calling a special session of the Legislature to take up gun control.

And Lt. Governor Dan Patrick is laying the groundwork by leading the Republican charge for Universal Gun Registration.

That’s why it’s critical you sign your “NO Gun Control Mandate” to your lawmakers.

Appeasing anti-gun demands is a recipe for disaster ahead of the 2020 elections — especially in Texas.

So ever since Lt. Governor Dan Patrick endorsed Universal Gun Registration, TXGR has been sounding the alarm to alert pro-gun Texans across the Lone Star State.

In fact, TXGR has collected nearly 20,000 of your “No Gun Control Mandate” petitions in just the last few weeks.

And the message was simple: No gun control, no deals!

If you recall, your petitions opposing “Red Flag” Gun Confiscation encouraged Governor Abbott and Lt. Governor Patrick to back away from that dangerous proposal in 2018.