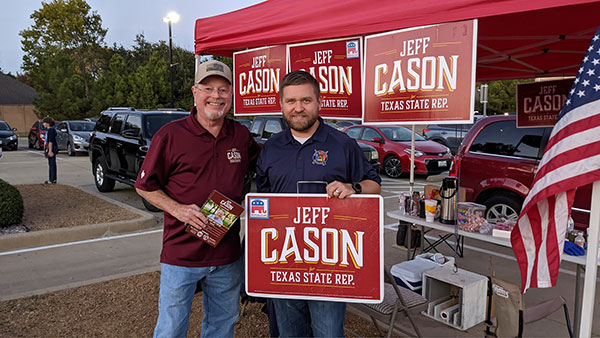 Who Really Won the Election?

What a crazy time.

Election Day is over, but the results for President and the U.S. Senate may not be known for days.

With expanded vote-by-mail in states across the country, we knew this is the scenario that would play out…and be ripe for voter fraud.

But thankfully, one thing is crystal clear: Michael Bloomberg lost!

In spite of Bloomberg and his anti-gun cohorts pouring tens of millions of dollars into Texas trying to buy control of the Texas House of Representatives — their hopes and dreams were crushed by the pro-gun “red wall” in the Lone Star State.

And it was all because of you.

As part of our Election Accountability Program, Texas Gun Rights launched a massive campaign to expose anti-gun politicians — and mobilize gun owners to lobby them.

We sent tens of thousands of pieces of mail, deployed hundreds of thousands of emails, sent thousands of text messages, and ran hard-hitting ads across Texas to make sure pro-gun Texans knew which candidates were bought-and-paid for by Bloomberg’s Gun Control Lobby.

In House District 92, Bloomberg-backed Democrat Jeff Whitfield went down in flames with only 47% of the vote after publicly opposing Constitutional Carry legislation and supporting Universal Gun Registration.

So after Jeff Cason took a bold, public stance to continue fighting for Constitutional Carry, he defeated Whitfield by 4 points with 51.1% of the vote.

In districts where Republicans failed to take a bold stance in support of your right to keep and bear arms, they only won with razor-thin margins.

Republican Linda Koop — who was running against Bloomberg-endorsed Democrat incumbent Ana Maria Ramos — actually lost her election after becoming the only Republican in the state to openly campaign for gun control.

Instead of standing up for gun owners, her pandering to anti-gun Democrats caused her to lose by nearly 8 points.

Proving that being an anti-gun Republican in Texas is a losing issue.

But the true victor in Texas was YOU.

It was thanks to your lobbying efforts throughout 2020 that made gun rights a leading issue in November.

Thanks to your efforts, Texas Gun Rights now has more than two dozen legislators on record in support of pro-gun Constitutional Carry legislation!

Now that the election is *mostly* over, the 2021 legislative session is rapidly approaching.

Even though Republicans will retain their legislative majorities, the crop of anti-gun legislators swept into office during the Beto wave of 2018 are STILL in Austin.

That means Republicans will once again be under immense pressure to abandon their pro-gun priorities in order to look “reasonable” to the anti-gun media.

That’s why it’s absolutely crucial for gun owners to continue pressuring their politicians to stand firm for our right to keep and bear arms!

So please sign your Constitutional Carry petition to your lawmakers today.

During these uncertain times, with political unrest, riots in the street, and calls to defund the police, Constitutional Carry is needed now more than ever.

If you’re a law-abiding citizen, you should be allowed to carry your handgun — to protect yourself and your family — without having to beg for permission or pay a fee.

With your continued support, we will continue changing the anti-gun culture in Austin. Thank you for all you do!