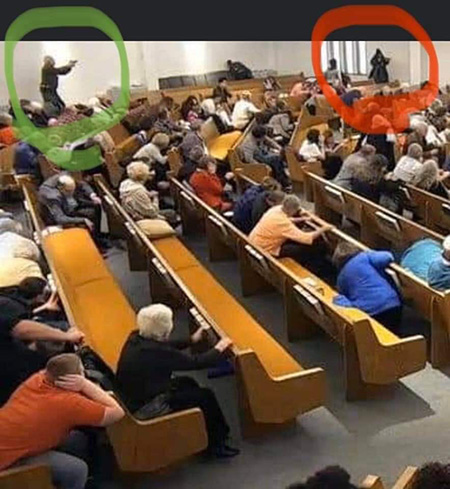 It was just a normal Sunday.

My wife and I just got out of church when we heard about the attempted mass murderer stopped by armed parishioners at West Freeway Church of Christ — only 50 miles away in White Settlement.

Yet again, a good guy with a gun triumphed over evil.

Sadly, two parishioners still lost their lives…two too many.

Predictably, and without shame, anti-gun Democrats flooded social media with demands for gun control before the crime scene could even be fully processed.

Here are just a couple of quotes from Presidential wannabes from Texas:

“We just need our elected leaders to have the courage to act [on gun control].” — Julian Castro

But the policies they want to enact would only embolden criminals by stripping you and me of our right to protect ourselves!

That’s why I need you to sign your NO GUN CONTROL MANDATE to your lawmakers RIGHT AWAY!

Your signed mandate will send a loud and clear message to your lawmakers that you won’t accept ANY form of gun control.

Anti-gun Democrats aren’t my only concern.

In response to the tragedies earlier this year, Republican Governor Greg Abbott’s gun control roadshow is still roaring across the state, holding hearings on “acceptable” forms of gun control.

You and I know the ONLY form of “acceptable” gun control is hitting your target!

Yet the Texas House Select Committee on Mass Violence Prevention and Community Safety is hosting another gun control hearing on January 9th in El Paso.

Following the attack in White Settlement, I’m afraid of what dangerous legislative proposals will come up.

So please sign your NO GUN CONTROL MANDATE RIGHT AWAY.

If you listen to most media reports, “armed security” stopped the White Settlement Church attack before it became an outright massacre.

What they’re failing to report is the “armed security” were volunteers. Folks like you and me.

Proving we are our best first line of defense.

Other phony headlines suggest our “loose” gun laws allowed this tragedy to happen in the first place.

The fake news media wants you to believe church carry in Texas was only made legal this past September.

The reality is law-abiding Texans have been protecting themselves in church since 1997.

… enabling the West Freeway Church of Christ to respond with swift action against this killer.

If anti-gun Democrats had it their way, this life-saving measure would’ve never passed…

You see, out-of-touch politicians want to continue expanding so-called “Gun-Free” zones, turning you and me into sitting ducks for a deranged killer.

And gun control zealots want to make it harder and more expensive for us law-abiding citizens to obtain a firearm to protect ourselves and our loved ones.

But as you and I know — when every SECOND counts — the police are MINUTES away.

So instead of ramming more deadly gun controls down our throats, politicians should pass life-saving policies like Constitutional Carry — allowing more law-abiding Texans to be their own first line of defense.

With your continued support, TXGR will continue leading the charge to pass pro-gun reforms — and fight ANY effort to pass more gun control in Texas.

But holding the line requires tremendous resources — especially when you’re fighting establishment politicians from BOTH parties.

So after you sign your NO GUN CONTROL MANDATE, I hope you’ll give $50 or even $30 to help TXGR continue fighting against gun control in Texas.

Your contributions allow me to deliver your petitions in Austin, meet with lawmakers across the state, and blanket Texas with mail and email — alerting constituents about the actions of their politicians.

Even $5 goes a long way to help, especially with the primary election season knocking on our door.

So please help us continue fighting in Texas today!