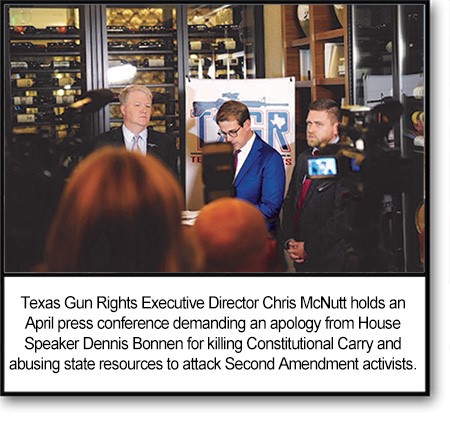 Texas House Speaker Dennis Bonnen — the politician who killed Constitutional Carry in 2019 — announced he will NOT seek re-election in 2020.

Instead, he’s laying the Speaker’s gavel down in disgrace and slamming the door shut on a 22-year career in the Austin swamp.

It all started because the Republican Speaker picked a fight with TXGR and the Second Amendment.

Earlier this year, Speaker Bonnen publicly attacked TXGR activists like you and me for exercising our First Amendment rights to advocate for the Second Amendment.

He tried to run us out of the state with manufactured allegations against our door-to-door canvassing efforts, which were debunked with police body camera footage.

While I sincerely hoped Bonnen would have apologized and learned from his mistakes, he kept digging a deeper hole for himself culminating in today’s shocking announcement.

I’ll explain more in a moment.

But first, here’s what you need to know about the immediate fallout from Bonnen’s announcement.

Many of his cronies are already angling to grab the reins of power.

Without your swift action, I’m afraid the Texas House will select yet another anti-gun Speaker of the House as Bonnen’s replacement.

That’s why I need you to sign your Constitutional Carry petition to your state representative right away.

Your petition will send a loud and clear message to your lawmakers you will accept ONLY a pro-gun Speaker of the Texas House who will support making Texas the 16th Constitutional Carry state.

In order to avoid taking a position, Bonnen quite literally dispatched state police to intercept me as I was peacefully handing out fliers door-to-door.

Then, he spread rumors I was brandishing a firearm in another lawmaker’s office without any proof (I wasn’t).

And he repeatedly complained to the left-wing media about me in order to get more Fake News stories published in hopes TXGR -– you and I — would just go away.

It was only when the DPS footage came out around the same time legislative deadlines were looming that the real reason behind his behavior was finally exposed:

“Do I think [Constitutional Carry] is bad policy? Yes. So I’m not running from that.”

No wonder he didn’’ like it too much when TXGR members like you and I turned up the heat on him with phone calls, petitions, and lobbying.

After drawing the ire of gun owners (and making an ass of himself about it in front of top Party donors at a fundraiser a few weeks later), others in the Conservative movement started to take notice…

… Dennis Bonnen has anger management issues and he is willing to stoop to the levels of corruption and abuse of power to serve his political agenda.

Dennis Bonnen finds himself in yet another scandal!

This time, Bonnen set up a private meeting with conservative activist Michael Quinn Sullivan and offered media credentials for his group in exchange for political favors.

Many political pundits and some legal experts are calling it a “quid pro quo.”

Sullivan tried exposing the corruption and Bonnen responded by launching a fake-news media campaign against him, too.

Of course, his lackeys in the liberal press took the bait once again. Hook, line, and sinker.

But thanks to TXGR’s previous run-in with Bonnen, Sullivan wisely chose to record his interaction with him out of fear of being similarly slandered:

“I had in mind the lies he told (publicly and without any consequence so far) about Chris McNutt of Texas Gun Rights…so I wasn’t going to let him do it to me.”

Last week, Sullivan released the recording… proving Bonnen to be even worse than the anti-gun political thug we first exposed him to be.

Driving a nail into the coffin of his political career.

So after facing calls from dozens of legislators over the weekend to resign as Speaker, Dennis Bonnen announced he will not seek re-election to the Texas House of Representatives.

While this is great news, we must not let this opportunity pass us by.

With Bonnen’s announcement coming before the 2020 March primaries, TXGR will be turning up the heat on all candidates for House of Representatives to replace Bonnen ONLY with a pro-gun Speaker of the House.