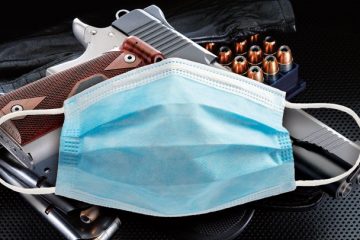 Can You Wear a Mask While Carrying in Texas?

There’s a popular meme floating around the internet claiming it is a crime to wear a mask while carrying a firearm.

Of course, with Governor Abbott allowing cities and counties to mandate the wearing of masks in businesses, this certainly would be of great concern for Texas gun owners.

While this is the case in Illinois and California, this is not true of Texas.

According to Texas Penal Code Sections 46.02 and 46.03, which lay out the regulations for carrying weapons in Texas, face coverings aren’t even mentioned in law.

In short, if you’re lawfully carrying your handgun while wearing a mask, you are NOT committing a crime in Texas.

Regardless of the debate surrounding the effectiveness of wearing masks to prevent the spread of COVID-19, or if government should even have that power, I thought it necessary to make sure you know fact from fiction.

And while it wouldn’t have been terribly surprising if the meme was true, it’s important for gun owners to be able to carry their sidearm without fear of prosecution for following local mandates.

And, truth be told, while it is illegal in California and Illinois to wear a mask while carrying, there have been no reported arrests for carrying while wearing a mask in either state during the COVID-19 outbreak.

Whenever you see a meme floating around social media that is making a claim about your state’s gun laws and there are no sources linked to it, I highly recommend checking state law or emailing us here at TXGR to help you discern what is true.

Texas’ gun laws already have enough restrictions, so the last thing we need is bad information that will cause confusion and discourage gun owners from practicing their Second Amendment rights.