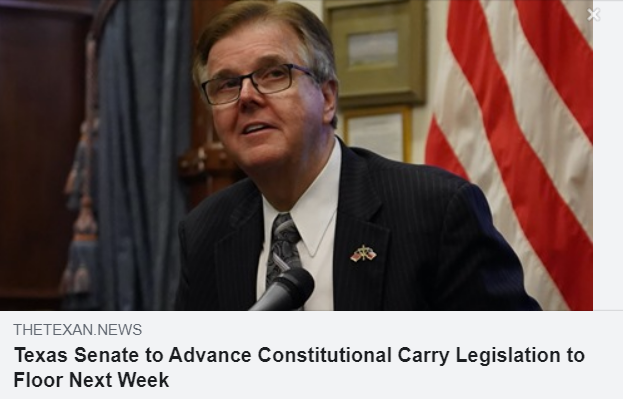 Constitutional Carry House Bill 1927 passed out of committee in the Texas Senate yesterday after a nearly 10-hour long public hearing!

We are in the home stretch.

Constitutional Carry House Bill 1927 passed out of committee in the Texas Senate yesterday after a nearly 10-hour long public hearing!

And thanks to your continued pressure, Lt. Gov. Dan Patrick is now promising a vote on the Senate floor next week!

I can’t tell you how critically important it is to keep up the pressure so we can get Constitutional Carry across the finish line!

Click here to contact your State Senator and urge them to pass Constitutional Carry HB 1927 — WITHOUT anti-gun amendments!

Your Texas Gun Rights faced off against Bloomberg-funded gun control activists and Police Union top brass — who were doing all they could to try and kill Constitutional Carry.

So when I testified to the Senate Committee, I delivered the following message: “Pass Constitutional Carry” and “Don’t California My Texas!”

You can watch my testimony below:

Thanks to your non-stop phone calls, emails, and even visits to the Capitol, your politicians are finally understanding that pro-gun Texans will accept nothing less than Constitutional Carry in 2021.

That’s why Governor Greg Abbott and many Republican Senators have recently stated they will now support HB 1927 — after being silent on Constitutional Carry for years!

And that’s exactly why House Bill 1927 was passed out of committee yesterday WITHOUT any amendments to water it down.

Even though the cards are starting to become stacked in our favor, there are STILL some Republican Senators refusing to take a public position on Constitutional Carry!

That is why it is critically important you contact your senator to support HB 1927 TODAY!

With twenty other states having Constitutional Carry as law of the land, there is no reason Texas should continue being left in the dust.

Thank you for everything you continue to do!