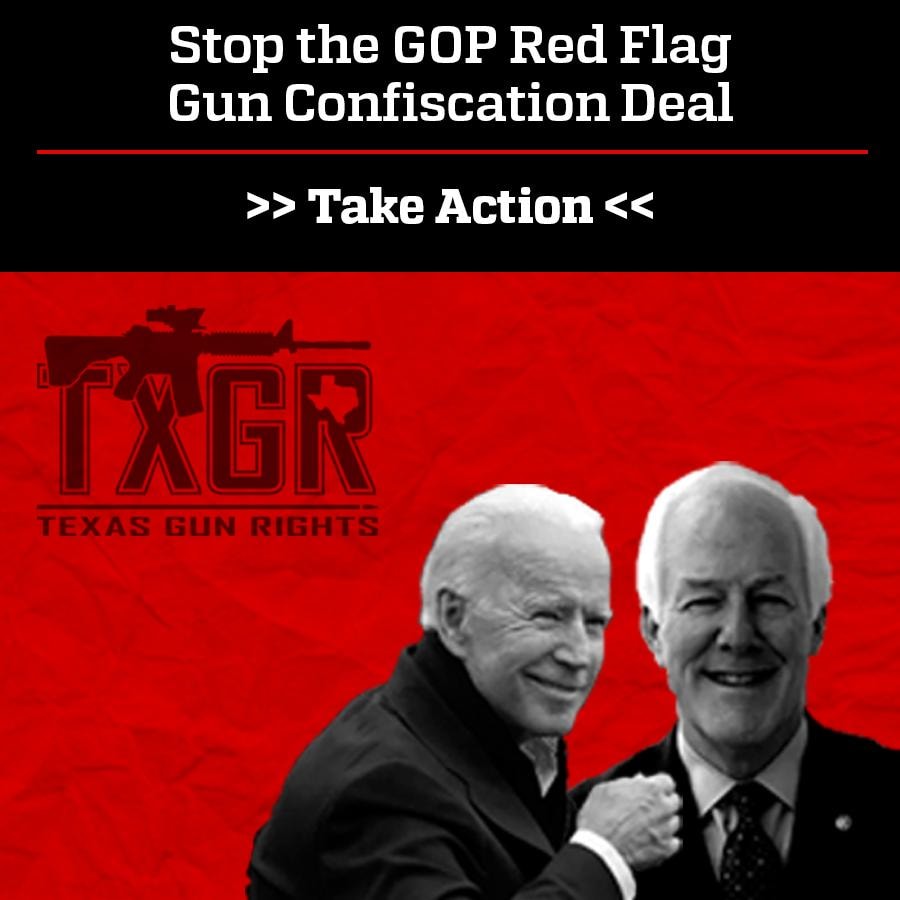 This is a national gun rights emergency, so please before you read the rest of this email contact your elected officials and tell them “No Gun Control Deals!”

Chief among these traitors is Texas Senator John Cornyn.

I can’t say that I am surprised.

For years, Cornyn has taken it upon himself to be the deal-maker on gun control with Democrats, always looking to go to the table with his most rabidly anti-gun colleagues to find something they can agree on and shove down our throats.

Cornyn is a perfect example of everything that is wrong with Washington, D.C.

Senator Cornyn can hide behind bloated ratings from the establishment gun lobby all he wants, but his wheeling and dealing with radical Democrats like Senator Chris Murphy has no excuse.

The left will not stop till America’s gun laws look like Canada or Cuba.

For the sake of our nation, gun owners must not accept compromise by dangerous elitists like John Cornyn.

With major GOP donors supporting his efforts in an open letter to lawmakers, Cornyn’s plot is an extreme danger to your gun freedom.

Just take a look at some gun control Cornyn is working to pass with Democrats:

Red Flag has been a losing issue in Texas thanks to the grassroots pressure generated by Patriots like you. This proposal would take your tax dollars and use them to effectively bribe politicians into passing Red Flag. This is the same strategy the feds have used to pressure states into changing the legal drinking age among other things. It works.

“Red Flag” laws call for firearms to be forcibly confiscated from law-abiding Americans without due process, based on accusations – without any proof – from disgruntled family members, neighbors, government officials, and/or current or ex-romantic partners, or roommates.

Judges are able to issue orders authorizing law enforcement, including SWAT teams, to immediately seize firearms from the subject of the order without notification or right to an attorney.

Stripping gun rights from men and women for simply having a toxic relationship or bad breakup.

By changing the definition of what constitutes the need for an FFL in order to sell firearms, this proposal would essentially ban private firearms sales.

You can vote, you can go to war, and you definitely can pay taxes but exercising your Second Amendment rights? Forget about it.

With RINOs like John Cornyn negotiating our rights away, who needs Democrats?

So please click here to send an email to Senator Cornyn and Senator Cruz urging them to reject ALL gun control deals in D.C.

But I have seen gun control defeated before by Patriots like you when the odds seemed against us.

Then, you went on to push Constitutional Carry into law in 2021.

We can repeat this success – but only with your help.

Please give what you are able today to fund our mail, email, phone, and on the ground efforts fighting for your gun rights in Texas.

With you supporting us, I know we can defeat the Democrat-RINO assault on the Second Amendment.