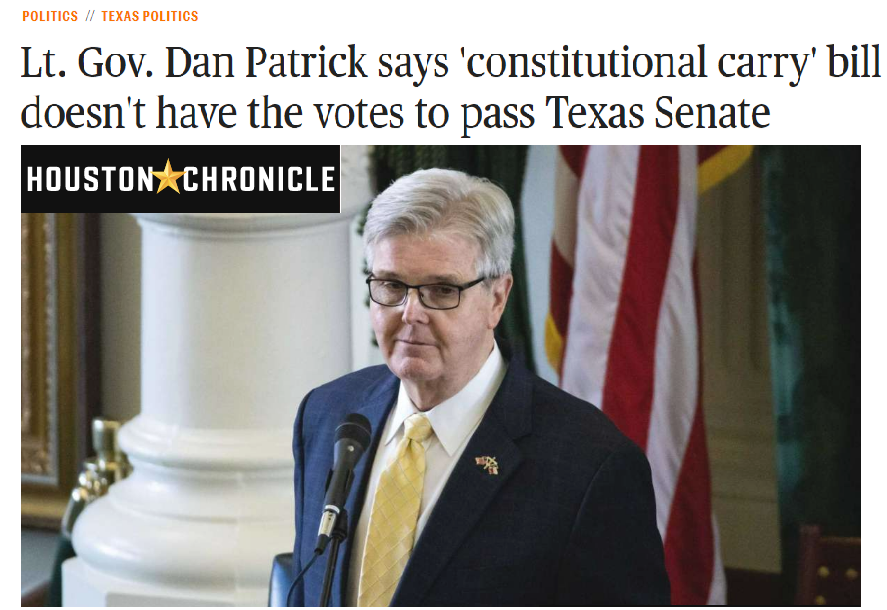 I’m disappointed, but I can’t say that I am surprised.

After Constitutional Carry passed with strong bipartisan support in the Texas House, Republicans in the Senate are trying to lower expectations on the bill passing and may even be working to outright kill it!

According to Lt. Governor Dan Patrick, who oversees the Texas Senate, “Constitutional Carry doesn’t have the votes.”1

This is a lame attempt by a weak leader to shift responsibility off himself for Constitutional Carry dying under his watch.

As anyone in a leadership role understands, and to anyone paying attention to Texas politics, the buck stops with Dan Patrick!

We can’t allow his excuse-making to ruin our best opportunity to make Texas the next Constitutional Carry state.

It’s time to double down our pressure.

Don’t let him fool you.

Patrick has the power to whip his Republican Senators in line to bring Constitutional Carry legislation to the Senate floor.

For example, Senator Joan Huffman is widely speculated as being one of the Republican defectors on Constitutional Carry — yet Lt. Gov. Patrick is protecting her and even appointed her as Chair and Vice-Chair to three important Senate Committees.

That means Patrick can strip her of her power if she refuses to allow Constitutional Carry to the floor for a vote, which is a top priority of the Republican Party of Texas.

Then there is Senator Drew Springer, who publicly opposed Constitutional Carry as a member of the Texas House.

Of course, as soon as he decided to run for Senate last fall, he came out with strong support of Constitutional Carry after his opponent Shelley Luther made it a top campaign priority.

But now that Springer is safely in office, his staff is telling constituents that he does NOT support Constitutional Carry (HB 1927).

You can’t make this stuff up!

Finally, we have Senator Kel Seliger.

According to the Texas Tribune, Seliger stated “it was too early to say whether he would block the bill from coming to the floor or vote against it if it made it to the floor.”2

Of course, Patrick appointed Seliger as Vice Chair of the important Senate Transportation Committee and represents a district that voted 78% in favor of President Trump.

There is no reason the Lt. Governor can’t bring these Republican Senators in line and in support of Constitutional Carry.

Rumors swirling in the Capitol suggested that Patrick was drumming up big-city law enforcement opposition to HB 1927 — before it was voted out of the Texas House.

He hoped this opposition would kill the bill before getting to the Senate so he and his colleagues wouldn’t have to deal with it.

In his own words, he wants to “find a path that a majority of senators will vote to pass.”

But what Dan Patrick MUST realize is pro-gun Texans are sick and tired of establishment Republicans killing Constitutional Carry for the past decade.

And pro-gun Texans won’t accept anything less than Constitutional Carry in 2021!

That’s why it’s critical you call Dan Patrick and encourage him to take up HB 1927 right away.

Seven Democrats bucked their party and voted for Constitutional Carry HB 1927 in the Texas House.

There is absolutely no excuse any Republican in the Texas Senate should oppose this pro-gun measure.

If Constitutional Carry dies in the Texas Senate, it comes solely at the hands of Dan Patrick and his weak-kneed counterparts.

That means it’s time to double down on our pressure.

Thank you for all that you continue to do!