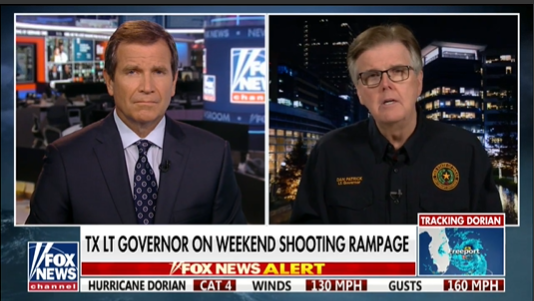 “The NRA needs to get behind the president on [Universal Gun Registration] and really address that issue.”

“We must do something on gun control.”

That’s the recurring theme of weak-kneed politicians following the recent tragedies in El Paso and Midland-Odessa.

Sadly, Texas Lt. Governor Dan Patrick is the latest “pro-gun” Republican tripping over themselves to appease the anti-gun media.

During a recent interview with Fox News, Lt. Governor Dan Patrick claimed we should end the private sale of firearms in America.

Forcing virtually every gun buyer in America to register in the Brady-NICS federal registry…requiring all gun sales be pre-approved by the government.

Now, Texas’ top Republican officials are seemingly on board with bringing this dangerous proposal back to life…

And Lt. Governor Patrick isn’t the only one!

If you recall from my recent email, Patrick’s statement echoes Governor Abbott’s sentiment that we should clamp down on private firearm sales — saying they are akin to selling guns to terrorists.

So it’s no surprise the top two Republicans in the state are in cahoots with each other on Obama-style gun control.

Worse, Texas Speaker of the House Dennis Bonnen — who publicly killed Constitutional Carry earlier this year –- is also on the commission.

According to Bonnen, the Senate & House Select Committees on Mass Violence Prevention & Community Safety will “be tasked with studying & recommending legislative solutions [on gun control].”

The stars are aligning for an anti-gun special session of the Texas Legislature.

As I mentioned in my recent communications, Governor Abbott is already under immense pressure to call the legislature into a special session to take up gun control.

Just today, 61 Democrat State Representatives held a press conference on the steps of the Capitol in Austin to demand a special session from Gov. Abbott.

According to CBS Austin, their “minimum” ask includes:

*** Punishing gun owners who had their guns stolen

Following the Democrat press conference, Abbott spokesman John Wittman said “Governor Abbott made clear in Odessa that all strategies are on the table that will lead to laws that make Texans safer.”

With a Republican Governor, Lt. Governor, and Speaker of the House already showing signs of caving, I’m afraid of what may happen next.

Especially if — God forbid — we experience yet another senseless tragedy as a result of failed gun control policies.

Proving criminals will always find a way to obtain an illegal firearm.

Another fact proven once again in Midland-Odessa.

“I am NOT going to use the evil acts of a handful of people to diminish the God-given rights of my fellow Texans. Period…

I say NO to ‘red flag’ pre-crime laws. NO to universal background checks. NO to bans on AR-15s, or high capacity magazines. NO to mandatory gun buybacks…

YES to giving every law-abiding single mom the right to carry a handgun to protect her and her kids without permission from the state, and the same for all other law-abiding Texans of age.”

So instead of continuing to punish law-abiding Texans for the actions of criminals, Governor Abbott and Lt. Governor Patrick should propose ways for more Texans to be their own first line of defense.

And the State of Texas should allow law-abiding Texans to be their own first line of defense — by becoming the 16th Constitutional Carry state!