Some Texas gun owners just scored a MAJOR victory after the law banning Constitutional Carry for 18-20 year olds was struck down in a Fort Worth Federal Court.

That means law-abiding gun owners between the ages of 18 and 20 will no longer have to beg for government permission to carry their legally possessed firearms!

“The issue is whether prohibiting law-abiding 18-to-20-year-olds from carrying a handgun in public for self-defense is consistent with this Nation’s historical tradition of firearm regulation,” wrote Judge Mark Pittman in his Opinion.

“Based on the Second Amendment’s text, as informed by Founding-Era history and tradition, the Court concludes that the Second Amendment protects against this prohibition. Texas’s statutory scheme must therefore be enjoined to the extent that law-abiding 18-to-20-year-olds are prohibited from applying for a license to carry a handgun.”

Texas Gun Rights led the charge for Constitutional Carry in Texas over the past decade before it was finally passed into law in 2021.

A Texas Gun Rights-backed amendment, offered by Representative Jeff Cason last year, would’ve strengthened the Constitutional Carry bill to allow law-abiding 18 to 20-year-olds to carry, but it was overwhelmingly voted down by RINOs and anti-gun Democrats alike in a 12-121 vote.

Constitutional Carry is a simple concept: if you can legally possess a firearm under federal law, you should be able to legally carry it to protect yourself and your loved ones WITHOUT a government permission slip.

That means we still have a few more things to clean up with the Texas Constitutional Carry law that lawmakers left unaddressed after voting against TXGR-backed amendments last year.

Constitutional Carry is STILL not allowed on lands managed by the Lower Colorado River Authority (LCRA), which covers a few dozen parks and lakes throughout central Texas.

Law-abiding adults are also still prohibited from Constitutionally Carrying on college campuses and must DISARM and dangerously leave their firearm unattended in their vehicle.

These ridiculous exclusions from the Texas Constitutional Carry law only create a confusing patchwork of laws that will cause otherwise law-abiding Texans to run afoul of the law by accidentally carrying in places where prohibited.

Licenses should NOT grant special privileges, so if you’re able to carry in an area with a license, you should be able to Constitutional Carry there as well.

And as Judge Pittman pointed out in his ruling, we cannot have certain gun owners treated as second class citizens… and as the Second Amendment clearly states: the right of the people to keep and bear Arms, SHALL NOT BE INFRINGED!

That’s why I hope you’ll help Texas Gun Rights continue fighting to defend and RESTORE the Second Amendment with a generous contribution TODAY!

Of course, the Biden-led Democrats are still promising to chip away at the Second Amendment.

Dementia Joe JUST doubled down on his commitment to ban so-called “assault weapons” if Democrats retain control in November . 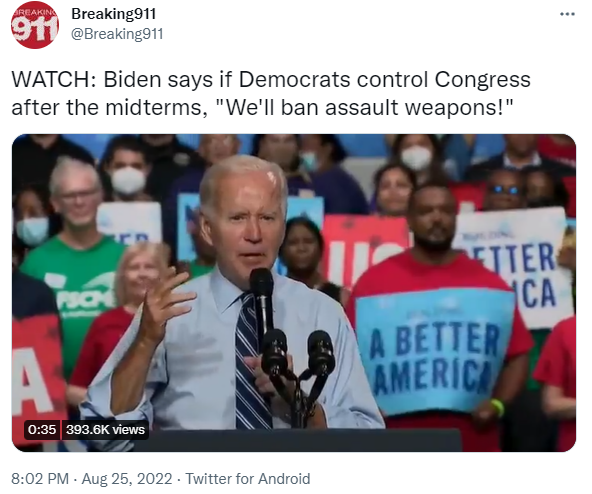 If you recall from our earlier communications, Pelosi’s House already passed a sweeping “assault weapons” ban (H.R. 1808) that would ban hundreds of commonly owned rifles, shotguns AND handguns.

Here in Texas, Robert Francis O’Rourke has doubled down on his demand for an “assault weapons” ban and even dangerous “Red Flag” Gun Confiscation laws without due process.

That’s why it is critically important gun owners do not back down over the next few months as our Second Amendment rights are literally on the chopping block. Your support is needed more now than ever.

So please give whatever you can generously afford and stay tuned for future updates.