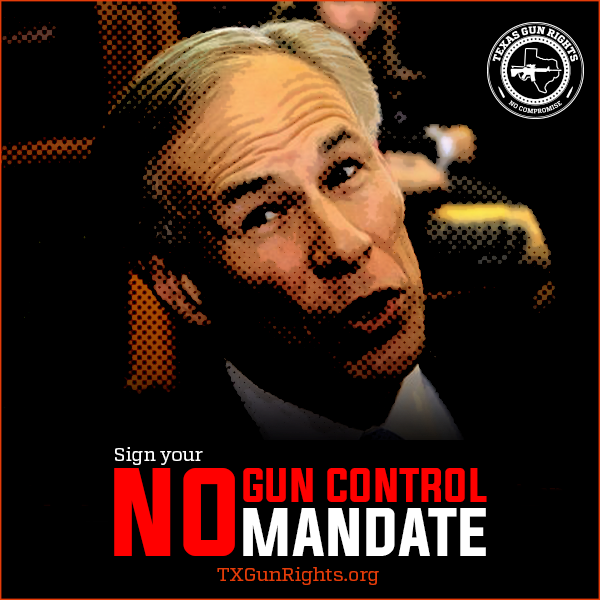 I’m sure you’ve heard the news by now.

In the wake of the horrific act of pure evil that occurred in Midland-Odessa on Saturday, my thoughts and prayers go out to those affected.

To those jumping at the chance to exploit this tragedy for political gain, while claiming prayers aren’t enough (ahem, Beto O’Rourke): I too pray for you.

Although my heart is with the victims and their families, I can’t sit back and let the radical Left use this tragedy to advance their gun control agenda.

But with a fresh tragedy at hand, Governor Abbott is facing immense pressure from the Gun Control Lobby to act.

Political insiders say Governor Abbott may call a special session of the Legislature to “do something” on gun control.

That’s why I hope you’ll sign your No Gun Control Mandate RIGHT AWAY.

Your signed petition will instruct Governor Abbott and your lawmakers to OPPOSE any new gun control scheme in Austin.

After Governor Abbott emerged from the first “roundtable” meeting, he signaled support for “Red Flag” LIGHT — in the form of so-called “welfare checks.”

Sending law enforcement to your door to “talk” if a disgruntled neighbor or family member is concerned that you legally purchased a firearm.

Abbott also made troublesome statements about clamping down on private firearm sales — saying they are akin to selling guns to terrorists.

Also discussed during the meeting:

Disarming law-abiding Americans and turning them into sitting ducks.

Not only that, the Austin American Statesman reports the Midland-Odessa shooter previously failed a background check in Texas.

Proving criminals will always find a way to obtain an illegal firearm.

So instead of proposing ways for more Texans to be their own first line of defense, Governor Abbott and gun control zealots continue proposing more layers of government bureaucracy.

Punishing law-abiding Texans for the actions of criminals.

And Governor Abbott’s recent tweet to “demand action” only reaffirms rumors he may cave to demands for a special session to pass gun control.

So it’s critical you sign your No Gun Control Mandate.

Like you, I wish these horrific events would stop occurring.

But as tragic as this recent shooting is, I’m afraid the effort of the unhinged Left to exploit the pain and suffering is even worse.

Sadly, before families even knew if their loved ones were safe, gun control zealots nationwide were rushing to push their radical agenda.

As first responders began arriving at the scene, these gun-control goons could not wait to fire blame at the Second Amendment and law-abiding gun owners:

“I want to be really clear that that’s exactly what we are going to do… Americans who own AR-15s, AK-47s, will have to sell them to the government. We’re not going to allow them to stay on our streets…”
— Beto O’Rourke

Here we are again.

For the second time in a matter of weeks, anti-gun politicians along with their media cohorts are exploiting a tragedy to support their gun control agenda.

Even Vice President Mike Pence told CNN he and President Trump are determined to work with Congress “to address and confront this scourge of mass atrocity in our country.”

And during an interview on the White House South Lawn on Sunday, President Trump declared “…a lot of Republicans, a lot of Democrats and people want to do something so we’re going to see. We’re doing a package and it’s coming about right now.”

All of this will assuredly add pressure on Governor Abbott to call a special session of the Texas legislature to take up gun control.

By the grace of God, police heroically shot back at the Midland-Odessa attacker and were able to prevent further bloodshed.

So instead of passing more gun control, Governor Abbott should lead the charge to allow law-abiding Texans be their own first line of defense — by making Texas the 16th Constitutional Carry state!

That’s why I need you to sign your No Gun Control Mandate to Governor Abbott and your lawmakers TODAY.

Your pressure has already forced Governor Abbott to backtrack his past support for “Red Flag” Gun Confiscation laws.

With your continued support and petitions, we can continue our united front of law-abiding Texans to stop gun control in the Lone Star State.