Essential liberty is often the first thing sacrificed in times of confusion.

Sadly, the confusion surrounding the COVID-19 outbreak is no different. 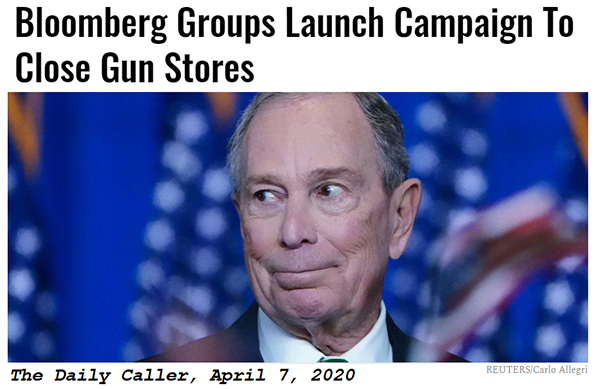 Even though the federal government and the state of Texas declared gun stores as “essential” businesses, nefarious forces are working to undermine those orders.

Unsurprisingly, Bloomberg and his cronies do not believe your Second Amendment rights are essential.

And if our elected officials don’t hear from us soon, I’m afraid they may cave to Bloomberg’s pressure.

If you believe gun stores should stay open, sign your Gun Stores are Essential petition right away!

Your petition will send a resounding message to your elected officials that your Second Amendment rights shall not be infringed!

Patriot, according to NBC DFW, law enforcement resources are already spread thin and Dallas police are not responding to all calls.

And I’m hearing similar reports from across all of Texas’ largest cities.

Worse, according to the Austin American Statesman, Travis County is releasing prisoners from jail as part of “emergency precautions” to prevent the spread of COVID-19…including those in jail for theft.

So keeping gun stores open for Americans to buy firearms and ammunition for self-defense is absolutely essential!

Just two weeks ago it was a law-abiding gun owner who prevented a “mass shooting” in Tulsa, Oklahoma.1

To the dismay of anti-gun mayors like Houston’s Sylvester Turner, criminals looking to cause harm will NOT stop committing crimes until after the pandemic goes away.

Patriotic Americans like you and me understand this as well as anyone.

So when millions of law-abiding citizens across the country purchased firearms for the first time — to defend themselves and their families in this time of uncertainty — Bloomberg and his lackeys were horrified.

Now, they’re trying to use COVID-19 as a means to further strip you of your Second Amendment rights by forcing gun stores to close.

Patriot, it is critical grassroots gun rights activists hold ANY politician accountable for failing to protect the Second Amendment — especially in times of crisis.

Because if bureaucrats deem your rights as expendable during a crisis, they have the power to suspend your rights at any time.

This is the exact type of “slippery slope” anti-gun Democrats like Nancy Pelosi would love to see.

During these uncertain times, we need support from our most loyal members and supporters to keep fighting to defend our right to keep and bear arms.

And organizing opposition to gun grabbers is going to require ALL HANDS ON DECK.