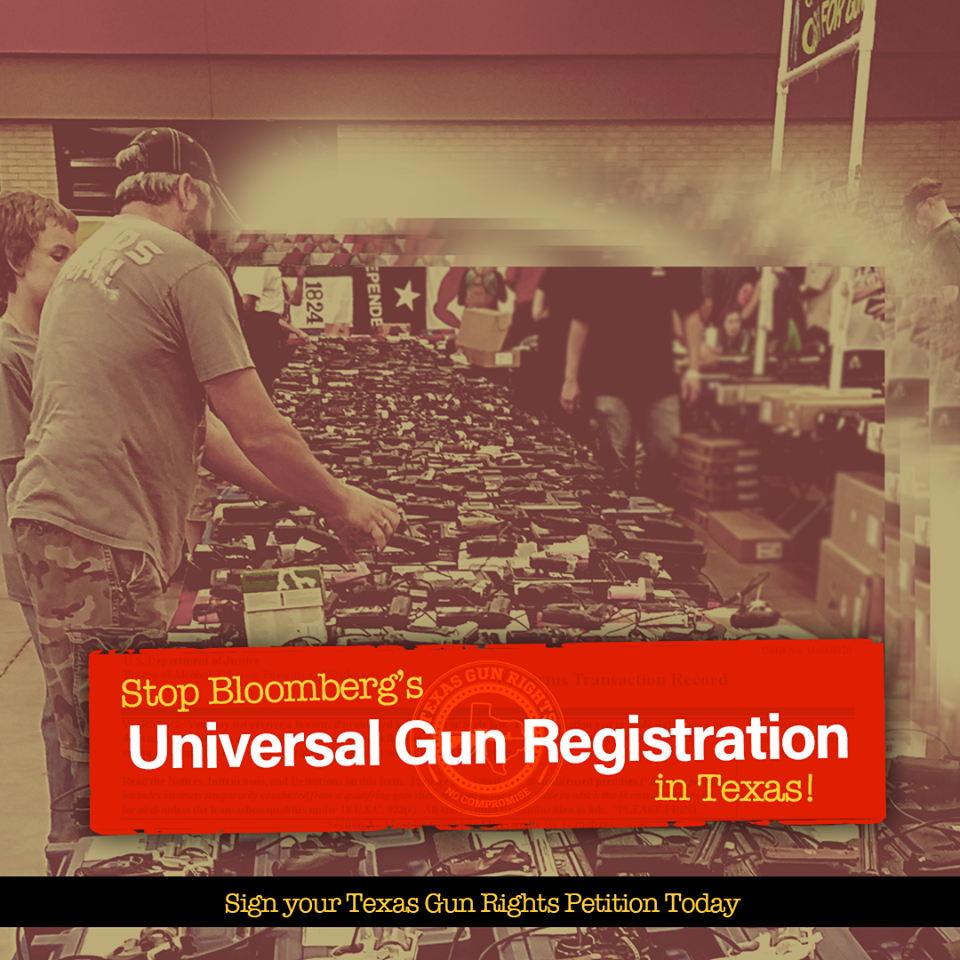 This is important so let me get straight to the point.

With only nine seats standing between anti-gun Democrats and control of the Texas House of Representatives, Michael Bloomberg is doubling down on his commitment to flood Texas with millions of dollars to flip Texas “blue” in November.

If successful, Universal Gun Registration is at the top of their wish list…just like in Virginia!

That’s why I’m counting on you to sign your petition to Stop Bloomberg’s “Universal Gun Registration” today!

…requiring every gun sale to be pre-approved by the government and giving government officials a record of every single firearm you own.

This means you can no longer sell your firearm, purchase one from a private seller, or even receive one as a gift without first asking for government approval.

You could even be made a criminal for loaning a gun to a buddy for hunting or going to the range.

Sadly, gun control fanatics and spineless RINOs in Texas renewed the conversation for this dangerous proposal just last year…emboldening Michael Bloomberg and his cohorts’ efforts to take control of the Texas House.

If you remember, following the acts of deranged men in El Paso and Midland-Odessa in 2019, our very own Republican Governor Greg Abbott suggested we clamp down on private firearm sales — saying they are akin to selling guns to terrorists.

“Not expanding the background check…makes no sense to me…Someone in the Republican Party has to take the lead on this.” — Lt. Gov Dan Patrick, Fox News 9/2/19

If Bloomberg is successful in November, the pressure will shift to the Republican-controlled Senate to pass gun control.

With Lt. Governor Patrick serving as Senate President, he cannot be trusted to stop ANY form of gun control.

That’s why it’s critical you sign your Stop Bloomberg’s “Universal Gun Registration” petition to your lawmakers right away!

The Brady-NICS Gun Registry is already a horribly flawed system, with countless law-abiding gun owners being denied their gun rights for simply having the same name, or similar name, as a criminal.

According to a 2009 study by John Lott of the Crime Research Prevention Center, 94% of all NICS background check denials were false positives.

Yet Bloomberg and misguided politicians want to funnel millions of more firearm sales and transfer records in Texas through this broken system…making it even worse!

The NICS gun owner registry should be dismantled, not expanded.

All too often politicians who run as pro-gun completely turn their back once they are in office.

So your petition will send a loud and clear message to your lawmakers that you won’t support ANY compromise when it comes to your Second Amendment rights.

In an election year, it is more critical than ever they understand that message.

And one thing is abundantly clear…

We cannot trust lawmakers to do the right thing without the persistent grassroots pressure of Second Amendment defenders like you.

It’s only because of your pressure that gun control hasn’t yet passed in Texas.

But it is up to Texans like you and me to stop this blatant attack on our gun rights.

And it’s crucial you help us draw a clear line in the sand that says “NO MORE GUN CONTROL.”

Texas Gun Rights is leading the fight against gun control in the state.

But with attacks coming from all sides, we need your support to keep the wolves at bay and push for the protection of Texas gun owners.