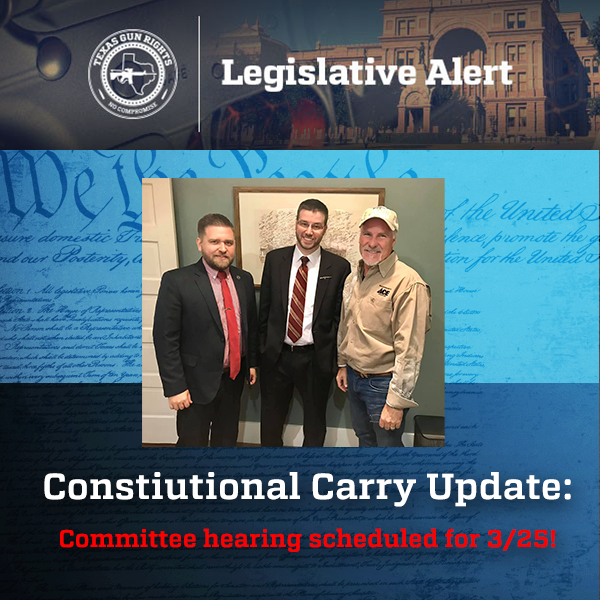 Thanks to the activism of thousands of TXGR members and supporters like you, TXGR-backed Constitutional Carry House Bills 1238 & 2900 were just scheduled for a hearing in the Texas House Homeland Security & Public Safety Committee.

In fact, the hearing will take place NEXT week on Thursday, March 25th at 10:30am in Austin!

Even better, due to changes in legislative protocols surrounding COVID-19, testimony to the committee can now be submitted ONLINE in support of this critical bill!

Click here to register your support for Constitutional Carry TODAY!

Just click the link above, fill out your information, select the bill number, and submit your testimony to the committee.

You can copy and paste this simple message:

HB 1238 & HB 2900 simply state that if you can legally possess a handgun, you can carry it — open or concealed — to protect yourself and your loved ones without having to beg for government permission.

In other words, as a law-abiding citizen, you shouldn’t need any “permission slip” from the government to carry your lawfully possessed handgun.

Under Constitutional Carry, the current permitting system will remain in place as optional for residents to obtain a License to Carry, allowing carry in other states (reciprocity).

The only difference is a citizen is not FORCED to ask for government permission in order to exercise this important constitutional right inside state lines.

You can already openly carry your long gun (shotgun or rifle) in Texas without a permit.

But if you try to carry a handgun open or concealed without a permit in Texas, you’re made a criminal!

It’s time politicians in Austin put an end to this disparity between long guns and handguns by passing true Constitutional Carry legislation!

Eighteen states already have Constitutional Carry laws on the books, with Montana and Utah joining the ranks earlier this year.

Even neighboring Oklahoma and Arkansas have Constitutional Carry as law of the land, yet law-abiding Texans are being forced to beg for government permission to protect themselves and their loved ones.

But as it stands, Texas is even trailing behind liberal Northeastern states like Maine and New Hampshire when it comes to Constitutional Carry.

I won’t sugar coat it, Sarah.

We will have to push hard if we want to make Constitutional Carry a reality in Texas.

You see, the political class in Austin is going to throw every possible roadblock in the path of Constitutional Carry, just as they’ve done in the past.

Rumors swirling around the Capitol suggest there is already a plot by the political establishment to kill HB 1238 & HB 2900 to placate anti-gun police chiefs and sheriffs in liberal cities like Austin, Dallas, and Houston.

Worse, the establishment gun lobby is staying silent on the issue, instead of demanding lawmakers support this pro-gun legislation!

It’s time lawmakers stop negotiating your rights away and start standing up for the Second Amendment!

So please urge the House Homeland Security to support HB 1238 & HB 2900 before the hearing on March 25th!

This committee is just the first hurdle of many.

So after you contact the committee, please consider chipping in $30 or even $15 to help me continue mobilizing pro-gun Texans from across the state in support of Constitutional Carry.

We’ve already sent over 100,000 pieces of mail, deployed 30,000 text messages, and placed several digital ads to engage more Texans in the fight for Constitutional Carry, but we must do more.

So even a contribution of $5 will help us mail 10 more pro-gun Texans postcards to send to their legislators in support of Constitutional Carry.

No matter what you can afford, every little bit helps. All that I ask is that you be as generous as you can.

But if you simply can’t afford to donate right now, please take action by registering your support for Constitutional Carry and forwarding this email to at least 5 pro-gun friends or family members.

Thank you for all that you do!