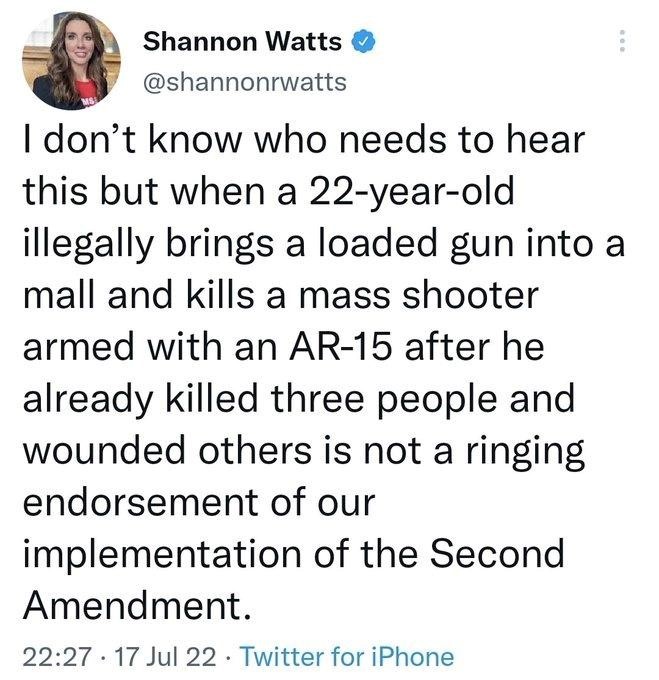 Just days ago, a psychopath with a firearm walked into Greenwood Park Mall in Indiana intending to inflict harm on as many people as possible.

But as soon as his rampage began, a law-abiding 22-year-old — carrying without a license thanks to Indiana’s new Constitutional Carry law — drew his weapon and killed the assailant.

The police and community are lauding him as a hero, but gun grabbers?

They are demonizing him as a criminal. His crime? Standing in the way of their political agenda.

When an armed hero saves lives, he deserves the praise given to him by the police and the community.

It’s those actions that protect everyday people from the lawless actions of violent men.

Yet the gun grabbers who claim that law-abiding citizens never stop criminals would rather denigrate this hero than celebrate the lives that have been saved.

Just last week, Nancy Pelosi told the nation, “As we go down this path, it is our responsibility to keep gun violence front-and-center in the media.”

It is our responsibility to ensure law-abiding gun owners are able to defend themselves against the evils of the world.

Nobody should be left defenseless against an armed thug, and your Texas Gun Rights is committed to ensuring that never happens in the Lone Star State.

We all know this is not the first or last time an armed person will be called on to protect the lives of others.

And it is all too clear that dangerous criminals threaten Texans as well.

That is why you and I must stand and fight against the gun control narrative invading Texas. If we don’t, our own Constitutional Carry law will be the first thing on the chopping block.

Put your foot down and tell gun grabbers in Austin that enough is enough by signing your “No Gun Control” petition right NOW.

And after you are done signing, consider chipping in a few dollars to keep the fight up in Texas.