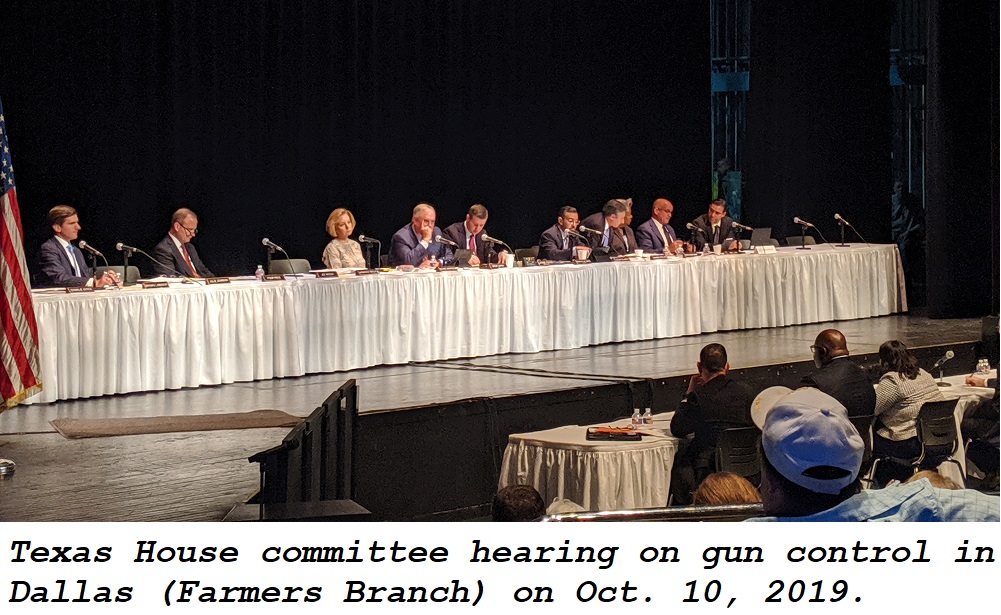 The fight against gun control in Texas is raging on…

Three more gun control hearings are scheduled across the state in just the next couple of weeks.

That’s why pro-gun Texans must send a resounding message: No gun control, no compromise!

They called for an end to “gun-free” zones and government permission slips to exercise their Second Amendment rights.

With three more hearings coming up in the near future, it is important TXGR members flood the hearing rooms and put the politicians on notice.

Despite pro-gun activists overwhelmingly outnumbering the anti-gunners in the room, committee members were still bombarded with proposals like Universal Gun Registration and “Red Flag” Gun Confiscation.

And registration is a TOP priority for Bloomberg-funded “Moms Against Guns.”

Worse yet, anti-gun Democrats are showing their true colors by revealing confiscation is on the top of their wish list.

On top of that, Governor Greg Abbott hinted toward the possibility of a special session of the Legislature for the purpose of taking up gun control.

And Lt. Governor Patrick’s lead on Universal Gun Registration is laying the groundwork.

So it’s critical you sign your “No Gun Control Mandate” to your lawmakers.

But with the next gun control hearing scheduled for October 17th in Odessa, I’m hoping to gather even more petitions from pro-gun Texans across the state.

So please forward this article to all your pro-gun family members, friends, and neighbors to help us recruit them into the fight for our gun rights!