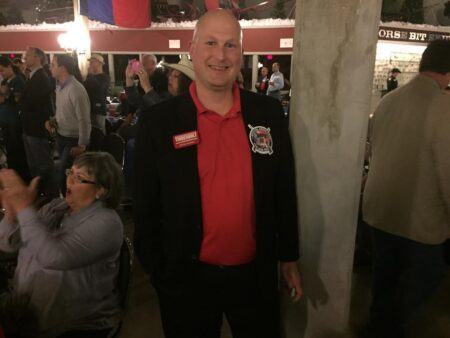 We’re in some crazy times.

The dust is clearing from the election and the results in the Lone Star State are about final.

Gun grabbers looking to build their lineup in Austin saw their hopes crash and burn on Tuesday.

Texas voters overwhelmingly voted to build upon Republican majorities in both the State House and State Senate… and to REJECT Beto O’Rourke and his anti-gun agenda.

This is great news, but our work isn’t done, Chris. A brand-new legislative session begins in January.

It is IMPERATIVE we remind our elected officials that voters expect them to make good on their promises to protect, defend, and RESTORE the Second Amendment in Texas.

Maintaining the status quo is NOT enough.

And I’ve got good news and bad news, Chris.

The good news is pro-gun champion Representative Tony Tinderholt is running for Speaker of the Texas House.

Even better, Tinderholt is running on a platform to END the tradition of appointing anti-gun Democrats to key committee chairmanships!

The bad news is, Speaker Phelan and many of his “Republican” allies support maintaining the tradition of handing power to anti-gun Democrats!

Chris, I’ve fought for gun rights in multiple state legislatures across the country and I can tell you with certainty that the party in power almost NEVER rewards the minority party with chairmanship and legislative power.

Why should Texas be any different?

After all, that is part of the reason it took so long to make Texas the 21st Constitutional Carry state — in spite of 20 years of Republican majorities!

If anti-gun Democrats were in power, do you think they would appoint pro-gun Republicans to important committees?

They would make good on their promises to ramrod radical gun control in the form of gun bans, Universal Gun Registration and “Red Flag” gun confiscation!

So click here to email your State Representative RIGHT AWAY!

Your message can be simple: elect a pro-gun speaker who will NOT appoint radical, anti-gun Democrats as committee chairs! Texas Gun Rights will keep me informed of your actions.

There should be no excuses to not continue going on the offensive in the Texas Legislature, especially after the resounding victories pro-gun Texans celebrated on election night.

So after you contact your State Representative, I hope I can count on your generous contribution to help us make sure your politicians live up to their pro-gun campaign promises.

Even $10 will help us mobilize more pro-gun activists across the state.

You can also forward this email to your friends to get them in on the fight.

With your continued support, we will continue changing the status quo in Austin.