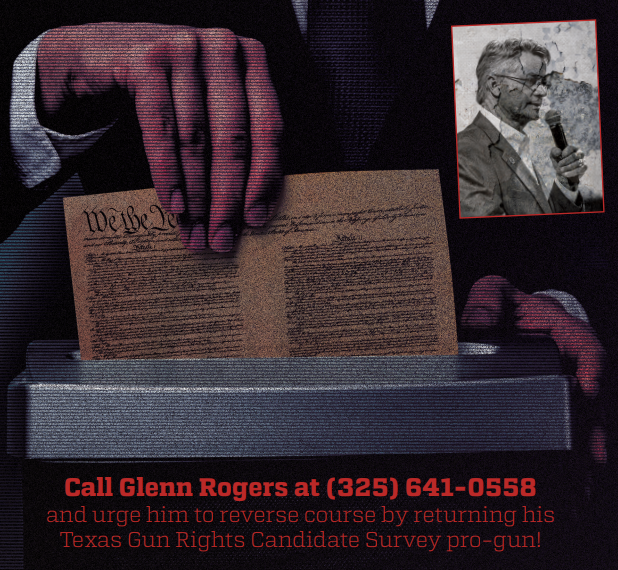 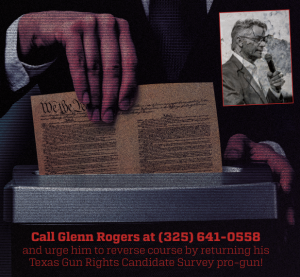 It has come to our attention that Representatives Glenn Rogers and Stephane Klick are trying to hide from their anti-gun voting record by bringing in political allies to provide them cover.

In a letter recently mailed to House District 60 & 91 residents, Texas Gun Rights was accused of making false allegations about the anti-gun record of Representatives Glenn Rogers and Stephanie Klick. Let me set the record straight:

During this time, Representative Rogers also refused to return his completed Texas Gun Rights candidate survey and go on the record for many important issues as related to the Second Amendment.

When it comes to gun rights in rural Texas, there is NO reason any Republican candidate shouldn’t boldly an unapologetically proclaim their support for the Second Amendment with a public record!

Thanks to the pressure from thousands of Texas Gun Rights members and supporters across House District 60, Representative Rogers changed his tune by voting for Constitutional Carry without licensing or training requirements in 2021…along with nearly every other Republican legislator and even 7 House Democrats! 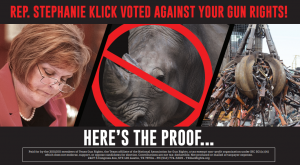 Unfortunately, both Representative Rogers and Representative Klick voted against 3 of Texas Gun Rights amendments that would have strengthened and expanded Constitutional Carry for more law-abiding gun owners:

TXGR backed amendment 6 by Cason (Record vote #264):
Protect the right of adults eighteen through twenty to carry their legally possessed handgun without a government permission slip.

Rogers: NO Klick: NO

Rogers: NO Klick: NO

TXGR backed amendment 21 by Biedermann (Record vote #278):
End the prohibition against Constitutional Carry on lands managed by the Lower Colorado River Authority including dozens of campgrounds across Texas.
Rogers: NO Klick: NO

These amendments were drafted by Texas Gun Rights attorneys and were offered by Representatives Kyle Biedermann and Jeff Cason. Sadly, the amendments were voted down by many politicians who did not have the political courage to pass the cleanest version of Constitutional Carry possible.

While Texas Gun Rights ultimately supported the final bill so Texas could become the 21st Constitutional Carry state, we did not give any politician false hope they would not be held accountable for their anti-gun votes. After all, Texas Gun Rights is NO COMPROMISE. And we actually mean it.

“Voting against these pro-gun amendments is a pro-gun vote!” How ridiculous does that sound?

Sadly, there are folks in Austin who would have you believe that an amendment allowing Constitutional Carry on parks and land managed by the Lower Colorado River Authority, or an amendment to prevent a law-abiding citizen from disarming on a college, would somehow have caused the bill to die in a Republican-controlled legislature.

Instead of having the fortitude to vote correctly, these weak sisters made a pact to vote in a block in hopes of giving their RINO counterparts cover so they wouldn’t be exposed in the election. They chose to play politics with your Second Amendment rights and voted to maintain dangerous gun control laws instead. But now we are here to EXPOSE them.

Licenses shouldn’t grant special privileges. That means, if you are able to legally possess a firearm, you should be able to carry it without begging for government permission. That also means that all gun owners should be treated equally under the law, so there isn’t a confusing patchwork of gun control, tripping up otherwise law-abiding citizens from accidentally running afoul of the law.

Representatives Rogers and Klick are caught flat-footed leading up to Election Day after being EXPOSED for their betrayals to gun owners. And now that pro-gun Texans are understandably upset over their actions, they’re throwing a hail marry by asking the political establishment to defend them.

No matter how hard they try, Representatives Rogers and Klick also can’t hide from the fact they are both also REFUSING to return their Texas Gun Rights candidate surveys and go on the record against the Biden/Beto anti-gun agenda.

In deep-red, pro-gun districts like House District 60 and 91, what anti-gun views are Representative Rogers and Klick trying to hide? When top Republican “leaders” Governor Abbott and Lt. Governor Dan Patrick have caved on “Red Flag” Gun Confiscation and Universal Gun Registration in the past, you can never count on ANY Republican who refuses to go on the record.

That is why we are here to get EVERY candidate on record, regardless of their party affiliation. And we will never compromise.