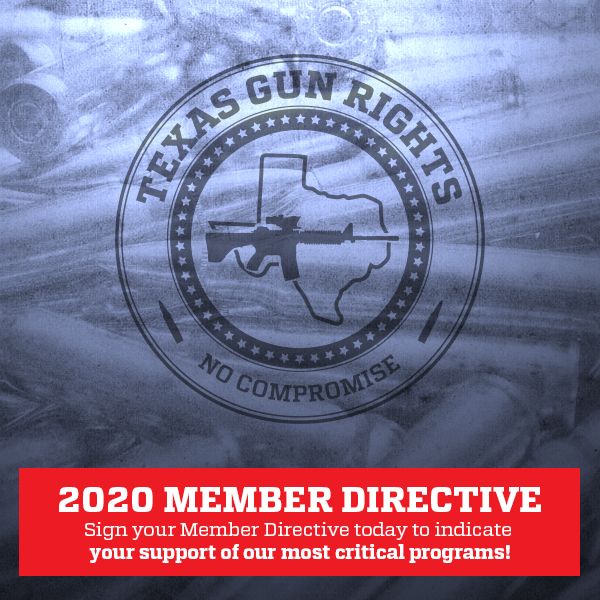 Texas is facing a targeted onslaught in 2020 like it has never seen before.

Gun control groups funded by Michael Bloomberg are still spending millions to try and make Texas “Virginia 2.0” — on top of the tens of millions anti-gun Democrats are already spending to flip Texas “blue” in 2020.

If successful come November, the Gun Control Lobby is planning to push the following dangerous proposals in Austin:

Most of these proposals became law in Virginia because pro-gun Virginians failed to show up during their election.

So Bloomberg and his cronies are counting on YOU staying home in 2020 in order to replicate their success.

With our resources stretched thin, and cash flowing to the coffers of anti-gun politicians from “Gun Control, Inc.,” I need direction on where to focus TXGR’s resources.

That’s why I’m asking for your IMMEDIATE advice.

Can I count on you to please complete and sign your official 2020 Texas Gun Rights Member Directive right away?

Your support is vital to protecting gun rights in Texas.

With election season kicking into high gear and an influx of cash still pouring into the state from Bloomberg and his cronies, we need all hands on deck to keep fighting in 2020!

One of my goals for this election season is to expose anti-gun politicians and candidates — by reporting their actions and positions to their constituents.

You have seen it before, politicians claim to be “pro-gun” while running for office, yet they have no legislative record to prove it –- or worse –- they outright lie about their record!

Once they get in office, they cave to the slightest pressure from the anti-gun left like a typical squish!

Sadly, the establishment gun lobby often turns a blind eye to the horse-trading and compromising of your gun rights by Republicans…

It is my goal to hold all politicians accountable for their actions — regardless of the party listed next to their name.

After all, gun control doesn’t become more palatable just because a Republican supported it.

We must continue our efforts by exposing his cronies if we want to get rid of the status quo in Austin.

So please select EXPOSE ANTI-GUN POLITICIANS AND CANDIDATES IN TEXAS on your Member Directive if you agree.

But exposing politicians and candidates alone will not be good enough to STOP Michael Bloomberg’s agenda.

Bloomberg and his cronies are spending in Texas three times what they spent to buy control of the Virginia legislature last year.

All Texans who value their gun rights must step up to fight off this massive enemy.

RINOs will compromise our rights away in an attempt to save themselves from the Gun Control Lobby’s attacks, and legislators who stand firm are sure to face tough battles.

And after the tragedies in El Paso and Midland-Odessa in 2019, Governor Abbott’s “Gun Control Roadshow” gave a platform for Bloomberg’s gun control policies in the legislature.

In fact, the House and Senate Committees on Mass Violence Prevention and Community Safety are promising more gun control hearings as soon as things return to “normal.”

On top of that, our very own Republican Lt. Governor Dan Patrick is leading the charge for radical Obama-era “Universal Gun Registration.”

So, if you believe drawing a line in the sand should be Texas Gun Rights’ top priority, please select STOP BLOOMBERG’S RADICAL GUN CONTROL AGENDA IN TEXAS on your Member Directive.

Although we must derail Bloomberg’s plans to install gun control in Texas, we must also continue advancing pro-gun legislation.

We both know a firearm is one of the ultimate equalizers a person could have for self-protection…and from tyranny.

With 15 states already recognizing Constitutional Carry as law of the land — including neighboring Oklahoma — it is high time for Texas to catch up and do the same.

This common sense, pro-gun policy would deal a MAJOR blow to any gun control efforts Bloomberg is scheming up.

So, if you believe TXGR should strike back on offense, then please select STRIKE BACK ON OFFENSE BY MAKING CONSTITUTIONAL CARRY A TOP ISSUE IN 2020 on your Member Directive.

Texas has a reputation of being solidly pro-gun, but the reality is our laws put us in the middle of the pack — and it is time to catch up.

But with so many vital issues needing our attention, your signed Member Directive will help Texas Gun Rights prioritize our resources.

Frankly, we can’t do it without your support, which is why I’ve included one more option:

But if this is the option you choose, please realize just how serious this is.