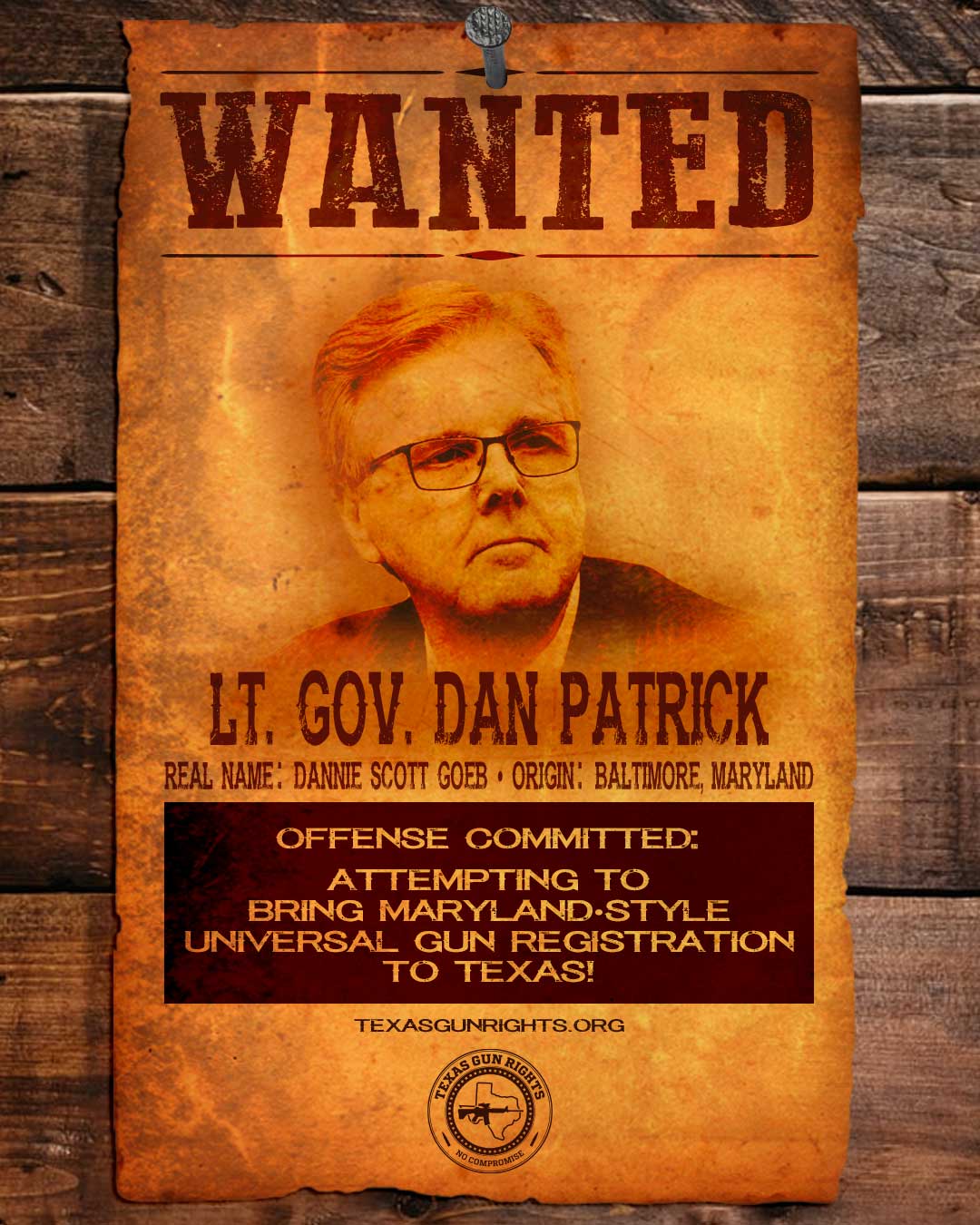 This is so urgent so let me get straight to the point.

Lt. Governor Dan Patrick is doubling down on his push for Universal Gun Registration in Texas and he must hear from you RIGHT AWAY.

If you’d like to send your own email, use the language below to guide your comments:

It would force virtually every gun buyer in Texas to register in the Brady-NICS federal registry…requiring all gun sales be pre-approved by the government.

But following the recent tragedy in Midland-Odessa, Lt. Governor Dan Patrick declared his support for Obama’s failed proposal to end the private sale of firearms in America

The shooter previously failed a background check — and he still acquired an illegal gun.

But according to the Dallas Morning News, Lt. Governor Dan Patrick is promising to “defy the NRA” and lead the Republican charge for Universal Gun Registration.

According to the Left-wing Editorial Board of the Austin American Statesman, the “GOP should follow Patrick’s lead…”

And Patrick appears to be taking their bad advice.

In an email on Sunday, Dan Patrick stated:

“If those of us who support the Second Amendment won’t begin a discussion on [Universal Gun Registration], we risk losing everything”

As you and I know, gun registration is just the FIRST step toward outright confiscation.

And history has proven when we give gun grabbers an inch, they will take a mile.

Nancy Pelosi would call it a “slippery slope.”

That’s why Dan Patrick must hear from you RIGHT AWAY.

According to a 2009 study by John Lott of the Crime Prevention Research Center, 94% of all NICS background check denials were false positives.

And they were wrongly denied.

Yet Dan Patrick wants to funnel every single firearms sale and transfer in Texas through this broken system.

The NICS gun owner registry should be dismantled, not expanded.

As you and I know, compromise is the enemy of freedom.

But it’s clear Dan Patrick is desperately looking for ways to negotiate our rights away — and he’s not backing down.

So please email Dan Patrick and encourage him to oppose ALL gun control: NO COMPROMISE!

The simple fact is law-abiding Texans don’t deserve to be continuously attacked for the actions of criminals.

Instead, our lawmakers should focus on allowing law-abiding Texans to be their own first line of defense — by passing pro-gun Constitutional Carry legislation.

With your continued support, Dan Patrick can be pushed in the right direction.

Just last year, your onslaught of phone calls forced Governor Abbott to backtrack his support of “Red Flag” Gun Confiscation laws — and forced Dan Patrick to declare it “dead on arrival” in the Texas Senate.

That pressure is exactly why Governor Abbott and Dan Patrick are both shying away from calls for outright “Red Flag” Gun Confiscation today.

Unfortunately, they now believe they can force Universal Gun Registration on law-abiding Texans.