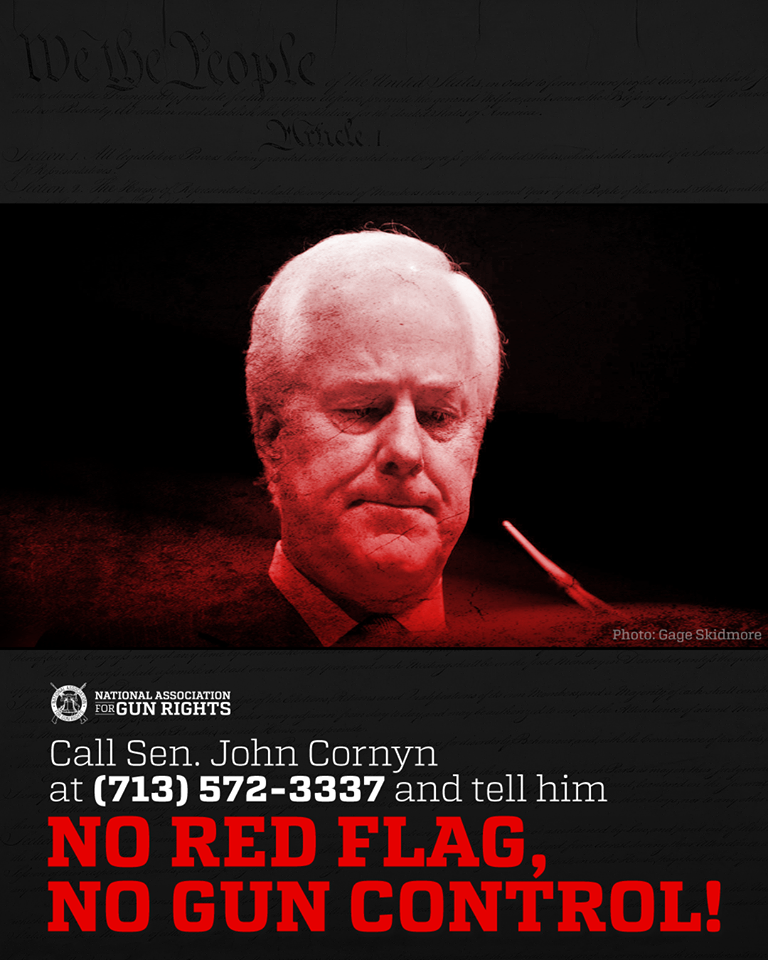 Politicians on both sides of the aisle are tripping over themselves to appease the anti-gun media.

During his recent trip to El Paso Cornyn stated:

“I know there’s a lot of discussion about so-called red flag laws…This is something that I think we need to discuss.”

Please call Senator Cornyn at (713) 572-3337 and respectfully urge him to reverse course by opposing ALL gun control!

As you know, “Red Flag” laws allow SWAT teams to burst into your house with orders to seize your firearms without due process, all based on nothing more than anonymous accusations.

Last year, a 62-year-old man was shot and killed in his own home in a Baltimore, MD suburb when police knocked down his door at 5:02 am.

And this is the type of policy Senator Cornyn wants for the rest of America.

Last month, he gave tacit support for “Red Flag” gun confiscation by advocating for a “bipartisan” and “strengthened” version of Nancy Pelosi’s H.R. 1585.

Of course, the “stronger version” of the bill Cornyn was hoping for is being co-written by Dianne “turn ‘em in” Feinstein.

And it includes the “Red Flag” gun confiscation orders she and now President Trump are calling for.

If passed as written, this bill alone would usher in the largest federal gun control expansion since the 1990s.

And Senator Cornyn is helping lead the charge.

Cornyn, who received an “A+ Rating” from the NRA and previously pledged to oppose magazine bans, is now putting that on the table as well.

I wish it weren’t true.

If this ill-advised behavior of abandoning gun owners continues, I’m afraid the consequences will be dire.

Not only is gun control an infringement on the Second Amendment, it’s a good way to LOSE the White House in 2020.

That means YOU and I are freedom’s last line of defense. No one else is going to step up.

And it’s absolutely critical we make sure Cornyn stand firm on our Second Amendment rights: NO COMPROMISE!

That’s why I hope you’ll take just one minute to call Senator Cornyn at (713) 572-3337 to politely insist he reverse course by opposing ALL gun control.

Then if you have time, please also call Senator Ted Cruz at (713) 718-3057 and urge him to OPPOSE any gun control, even if it’s backed by President Trump.

Thank you for your support and activism!