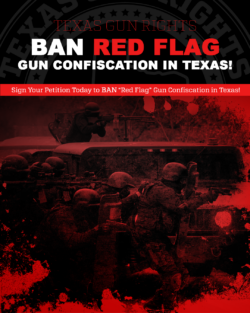 I hate to say it, but our dire warnings have come true.

Before the 2023 legislative session even begins, Democrats are already making moves to enact gun confiscation all across Texas.

If passed, “Red Flag” will allow government agents to storm the homes of gun owners and seize their firearms all without due process or even a crime being committed.

This tyrannical disarmament MUST be stopped at all costs.

That’s why I need your help to stave off this attack by signing your BAN “Red Flag” Gun Confiscation petition immediately.

So how would “Red Flag” affect you?

It can all begin with a crazy ex, disgruntled co-worker, or anti-gun neighbor that doesn’t like your Texas Gun Rights sticker on the back of your truck.

A simple accusation of mental deficiency could have government agents knocking on your door.

All local law enforcement needs to do is convince a judge the complaint is true and then send their “Gun Confiscation Squad” to your house to seize your guns without notice.

The hearing is conducted in secret (called “ex parte”), where you are not allowed to defend yourself in court.

You won’t even know anything about it until government agents show up at your door to take your guns.

Since this law was enacted in Florida, an average of five petitions have been filed each day to seize the guns of law-abiding citizens.

If you find yourself in this situation you don’t even have a right to an attorney because you were never charged with a crime.

That means YOU will be forced to pay for legal representation out of pocket and give the court thousands of dollars just to get your guns back.

Many would say that “Red Flag” will never come to the “deep-red” Lone Star State.

If you follow Texas politics, you know just how hard it is for our lawmakers to pass up federal funds.

To put it lightly, the possibilities of this draconian nightmare becoming law are quite real and we must act now.

So after you sign your BAN “Red Flag” Gun Confiscation petition please consider the most generous donation of $60 or even just $30.

Our country was built on individual responsibility and sacrifice.

The beloved values of that country will be defended with nothing less.

So if $60 or $30 is too much right now you can also spread your activism over time with a $10 recurring monthly gift.

As we know, “freedom is never more than one generation away from extinction”.

So much has been given for the rights we hold so dearly.

I hope I can count on you to continue that tradition.