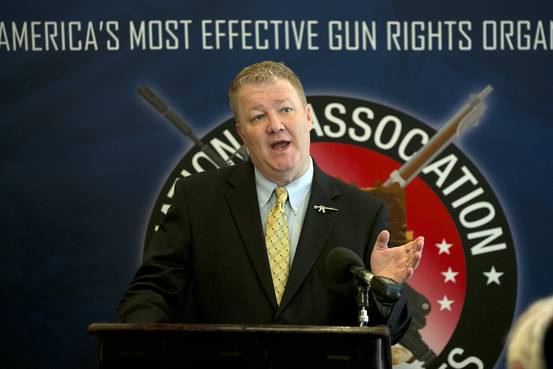 The gloves are off in Texas and the political class is in an uproar.

Let me explain how it all happened.

Lawmakers in Austin are facing intense pressure from members and supporters of Texas Gun Rights — the official state affiliate of the National Association for Gun Rights — to make Texas the 16th Constitutional Carry State.

Unsurprisingly, the political class doesn’t like it when you flood their offices with calls, emails, faxes, and personal visits, insisting they simply follow through on their campaign promises to support the Second Amendment.

And this week it all boiled over.

Speaker Bonnen finally admitted publicly in the Dallas Morning News what we all had suspicions of: He OPPOSES Constitutional Carry.

But instead of gracefully coming clean with his position, he’s lashing out at pro-gun activists instead.

Make no mistake, attacks being levied at gun owners by the political class in Austin are nothing more than a deliberate overreaction designed to deflect attention from their attempt to kill Constitutional Carry.

They’re really just mad that NAGR and TXGR are engaged in grassroots and door-to-door politics, which is the core of the First Amendment, and a respected American tradition.

So, like a bunch of whiney gun grabbers, they’re running to the liberal press and playing the fake-news card in hopes of getting a few stories to intimidate Second Amendment supporters into shutting up and backing down.

That will never happen.

But these actions this week do prove one thing:

They’re feeling the heat from the tens of thousands of Second Amendment supporters like you.

When activists showed up in Speaker Bonnen’s district to notify pro-gun Texans that Bonnen is running out the clock on Constitutional Carry, it set him into orbit.

Of course, politicians like Speaker Dennis Bonnen LOVE to show up at your doorstep and make false promises just to earn your vote in the election season.

So they shouldn’t be surprised when we show up in their neighborhoods to insist they simply keep their promises in the legislative season.

After all, what did Speaker Bonnen think was going to happen when he referred Constitutional Carry — a signature Republican Platform issue — to a Committee chaired by anti-gun DEMOCRAT Poncho Nevarez?

We will continue to fight to make Texas the nation’s 16th Constitutional Carry state, even if that means exposing snowflakes like Speaker Bonnen in the election season.

Just ask anti-gun Republicans like Joe Strauss or Jason Villalba what happens to the political careers of politicians who oppose Constitutional Carry and the Second Amendment rights of Texans.

If you too believe it’s time for politicians to buck up and uphold their promise, then I ask you to join me and DOUBLE DOWN.

Call them and politely, but firmly, ask them to reverse course and hold a public hearing on HB 357, the Constitutional Carry bill.

Insist they stop attacking Second Amendment supporters and fulfill their campaign promises to fight alongside gun owners in Austin.

Thanks for all that you do to help politically fight back against the gun grabbers.