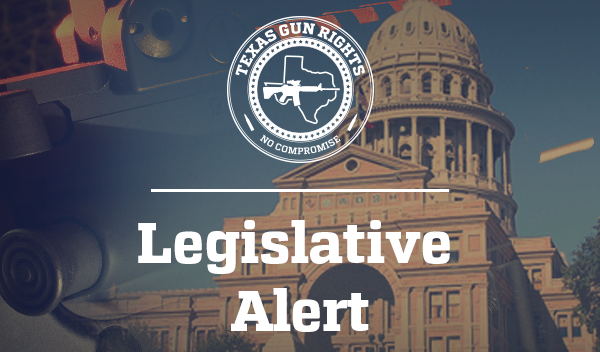 It is an idea whose time has come.

That means law-abiding Texans no longer need to beg for a government permission slip to legally carry a handgun in public — open or concealed! To learn EXACTLY what this means for you, you can check out this FREE Constitutional Carry guide from U.S. Law Shield.

Fellow Patriot, future generations of Texans will look back to you as the gun rights grassroots that won this great political battle for their Second Amendment rights.

For the past 8 years and 4 legislative sessions, Texas Gun Rights members and supporters have been leading the charge by making Constitutional Carry the #1 gun rights issue in the state of Texas.

Since 2013, TXGR has spent nearly two million dollars linking the legislative session to the election season, ensuring ALL legislators and candidates knew pro-gun Texans expected nothing less than Constitutional Carry.

After mobilizing gun owners through mail, email, text messages, digital ads, radio ads, and even TV ads, no other group has come close to matching our firepower in Texas — and it’s helped us tear down the persistent roadblocks thrown up by the Austin political establishment.

Here is a snapshot of what TXGR members helped us accomplish in 2021 alone:

With Texas finally on board, one in three Americans now live in a Constitutional Carry state!

As exciting as this victory is, our work is not done, Fellow Patriot.

When the legislature reconvenes in 2023, we must continue working to ensure ALL law-abiding Texans are treated equally under the new Constitutional Carry law.

For example, military-aged Texans under 21 will still not be able to carry their handgun under the new Constitutional Carry law.

That means thousands of young men and women are being left defenseless, preventing many young parents from protecting their children.

Law-abiding Texans visiting or living on college campuses must still obtain a license to carry on top of the red tape from their college campus.

Lands managed by the Lower Colorado River Authority — including many parks and camp sites — will also still require an LTC to carry a handgun on the land.

Ultimately, ALL law-abiding individuals should be allowed to carry in the same areas where LTC holders can carry.

That is why Texas Gun Rights will continue fighting for EVERY law-abiding citizen’s right to carry in the Lone Star State!

You have made Texas more safe and free and I am proud to stand by you in the fight for gun rights in Texas.

Thank you so much for your hard work.

P.S. You no longer need to beg for a government permission slip to legally carry your handgun in public, open or concealed… Texas is a Constitutional Carry state!

As exciting as this victory is, our work is not done, Fellow Patriot.

When the legislature reconvenes in 2023, we must continue working to ensure ALL law-abiding Texans are treated equally under the new Constitutional Carry law.

So please chip in $50 or even $15 to help TXGR continue fighting for gun rights in Texas!

Constitutional Carry will soon become a reality in the Lone Star State!

After a nearly decade-long fight against the political establishment, Constitutional Carry is finally on its way to the desk of Governor Greg Abbott.

The finish line is within our grasp, but we must not celebrate quite yet…

With the stroke of his pen, the Texas Constitutional Carry law would go into effect on September 1st!

The good news is, Governor Abbott already vowed to sign Constitutional Carry into law as soon as it reaches his desk.

Now, we must make sure he delivers on his promise.

With your continued support, we WILL make Texas the 21st Constitutional Carry state!

Dennis Bonnen runs out the clock on Constitutional Carry

Constitutional Carry is dead for the 2019 legislative session.

Even though Speaker Dennis Bonnen declared Constitutional Carry dead weeks ago, he alone had the power to advance HB 357 up until yesterday — yet he refused to do so.

After Speaker Bonnen threw a public temper tantrum in the media last month — revealing his long held opposition to Constitutional Carry — he finally made good on his word to kill HB 357 by using legislative deadlines.

But we knew this was coming.

In fact, we’re already planning to make our presence felt in the 2020 primaries — and come back stronger than ever for the 2021 session.

To show your support for this fight, please sign your Constitutional Carry petition and then consider chipping in $10 or $20 to help fund it!

Even though there are a few weeks left before the legislature officially adjourns, one thing is certain: politicians in Austin have FAILED gun rights activists yet again.

And if you’ve been following my e-mail updates, Speaker Bonnen allowed gun control bills to be scheduled on the House floor for a vote…while Constitutional Carry languished in committee.

Thanks to your pressure, pro-gun Texans were able to stop those bills in their tracks by using the same legislative deadlines Bonnen used to kill Constitutional Carry.

And with your support, we successfully exposed Speaker Bonnen as a wolf masquerading in pro-gun sheep’s clothing.

But I won’t sugarcoat it: we’ve got an uphill battle in Texas moving forward.

The only way we’re going to enact meaningful gun policy in Texas is to continue FORCING anti-gun politicians out of the shadows by making them go on record for pro-gun bills like Constitutional Carry.

That’s why Texas Gun Rights will not relent in its efforts to get a recorded vote.

This vote will separate the fake “pro-gun” politicians from the true Second Amendment champions.

After all, so-called “pro-Second Amendment” Republicans played a big role in killing Constitutional Carry in 2015 and 2017.

Thanks to the cowardice of weak-kneed Republicans — refusing to stand up to Speaker Bonnen — yet another year passes in Texas without getting a recorded vote on Constitutional Carry.

And like a dagger to the heart, Speaker Bonnen used legislative deadlines to kill Constitutional Carry in 2019.

You can bet Speaker Bonnen and his lackeys will continue trying to kill Constitutional Carry in future sessions, too.

That’s why it’s so important to sign your petition to continue putting pressure on your elected officials to support Constitutional Carry.

Chris, we believe that politicians should work for us, not the other way around.

That means they MUST go on the record on legislation that grassroots activists strongly demand like Constitutional Carry.

These votes will show pro-gun Texans who stands with them and who is in league with gun grabbers like billionaire anti-gun activist Michael Bloomberg.

Thanks to you, Constitutional Carry is at the front and center of public discussion.

And we can use this momentum going forward to continue our push to restore gun rights in Texas.

As you have seen, the path to getting a vote on Constitutional Carry will not be easy.

Like anything worth fighting for, this will require considerable resources.

So after you’ve signed your petition, please consider chipping in $10 or $20 to bring more gun rights activists in the fight.

Our path forward for the next two years relies on you.

Thank you in advance for your continued support.

For Texas and Freedom, 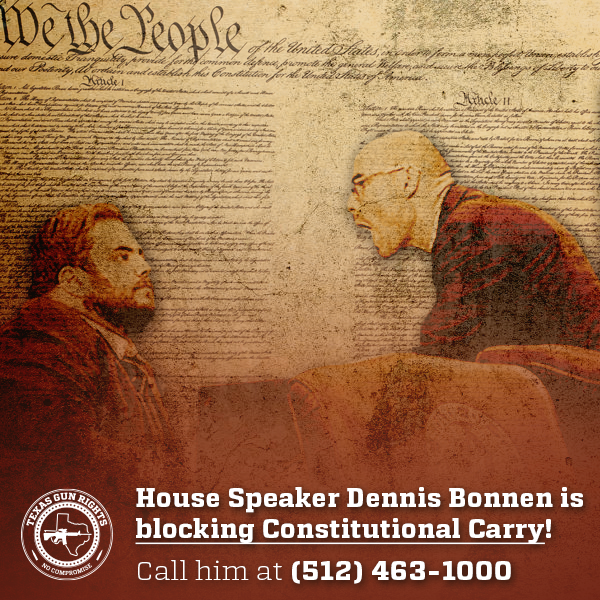 That was the resounding message that sent shockwaves through the Lone Star State after yesterday’s primary election.

In fact, that message was amplified especially in House District 114, the home of notoriously anti-gun State Representative Jason Villalba.

You see, Jason Villalba has long been a thorn in the side of gun owners.

In addition to his public opposition to Constitutional Carry, Jason Villalba publicly advocates for more gun control in Texas… as a Republican!

And in 2013, he even voted to expand dangerous “gun-free” criminal-safe zones.

But after last night, gun owners in Villalba’s district are grinning from ear to ear.

Time after time, politicians like Jason Villalba reject the voices of their pro-gun constituents… and fold to the demands of gun control zealots.

And instead of listening to constituents pleas to reverse course, they dig a hole that’s too deep to get out of.

This time, gun owners get to dance on the grave of another anti-gun political career that came to a screeching halt.

But there is more good news.

Gun owners were heard loud and clear throughout the entire state.

In fact, Texas Gun Rights sent tens of thousands of pieces of mail across Texas, as well as phone calls, and sent more than 100,000 e-mails informing gun owners about the anti-gun actions of their candidates… and lobbying them to reverse course.

And challengers who tried to hide their views on the Second Amendment and REFUSED to return their Texas Gun Rights candidate survey did not find the approval of gun owners.

This proves that candidates who REFUSE to take a bold stance to fight for your gun rights will have a short-lived political career.

But there is still work to do.

There are open seats where candidates are still REFUSING to return their gun rights surveys. And we MUST get them on the record.

Thank you for your continued activism!