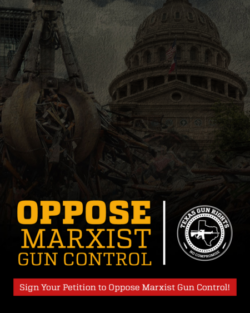 Sadly, because the “red wave” was nothing more than a ripple (and because of the horrific actions of a deranged criminal in Uvalde last summer) lawmakers are under immense pressure to “do something” now that they are finally in session.

These radical bills must be SWIFTLY defeated!

Let’s face the facts: there isn’t a single piece of gun control legislation hoplophobes in the Democrat Party find unreasonable.

Coincidentally, even the father of communism, Karl Marx himself, supported gun rights for citizens…because he knew they were a “means to an end.”

Yet all of his modern-era followers — like Lenin, Mao, and Castro — banned and CONFISCATED citizens from having guns AFTER assuming power in their countries.

“There’s a reason you never see a Communist, a Marxist, or even a Socialist politician support the right of common people to keep and bear arms: Those forms of government require more submission to the state than armed citizens would tolerate.” – U.S. Congressman Thomas Massie (Kentucky), Chairman of the U.S. House Second Amendment Caucus

Thankfully, the U.S. has the Second Amendment (and Texas has Article 1, Section 23 of the Texas Constitution) preserving our inalienable rights to keep and bear arms.

Their hope: if they can’t get rid of the Second Amendment in one fell swoop, they will slice away at it until it receives a death by a thousand cuts.

Of course, that isn’t stopping them from going for the big stuff like a semi-auto ban (SB 32), thinly veiled as an “Assault Weapons” Ban.

And as of the writing of this email, there are eight bills filed in the Texas House requiring Universal Gun Registration or a piecemeal approach to it.

These bills would require law-abiding Texans to beg for government approval of every firearm purchase or require you to report legal sales of firearms to law enforcement.

You wouldn’t even be able to loan a friend or family member a hunting rifle without first getting government permission or risk being charged with a crime (HB 155 and HB 236).

The fact is there’s no way this draconian scheme wouldn’t create a de facto gun registry, giving the government a list of all guns and legal gun owners in the state.

And it’s been proven throughout history that registration schemes like this will inevitably lead to confiscation.

Joe Biden said Cornyn’s bill with Democrat Senator Chris Murphy was the most significant gun control to pass in 30 years!

That’s why it’s so crucial to sign your Oppose Marxist Gun Control petition right away.

Your petition sends a reminder to the legislature that pro-gun Texans are watching them like hawks — and that your Second Amendment rights are NOT negotiable.

After all, it was as recent as 2019 when Governor Abbott and Lt. Governor Patrick launched a gun control roadshow after caving to the anti-gun media to punish law-abiding gun owners.

And year after year, they made excuses to kill Constitutional Carry until those excuses ran dry.

Thanks to the pressure of relentless grassroots activists like YOU, Governor Abbott and Lt. Governor Patrick not only stopped caving to the anti-gun mob, but they also buckled under YOUR pressure to pass Constitutional Carry and other pro-gun reforms instead of gun control in 2021!

Help me keep the momentum going in 2023 by signing your Oppose Marxist Gun Control petition TODAY.

TXGR’s hard-nosed, no compromise approach is now a proven model here in the Lone Star State.

And it is the groundswell of grassroots activism that pushes pro-gun legislation over the finish line — not politicians pontificating and negotiating your rights away in a secret, smoke-filled room at the capitol.

But only through your continued support can we continue defeating the growing threats to our right to keep and bear arms –- and passing pro-gun reforms.

That’s why I’m hoping you’ll go above and beyond signing your Oppose Marxist Gun Control petition with your most generous contribution to start off the new year!

As you can imagine, defending and restoring gun rights against the left-wing machine isn’t easy or cheap.

Especially with the deep pockets of Michael Bloomberg and George Soros funding a relentless war on gun owners.

That’s why I’m hoping you’ll include your most generous contribution of $100 or $50 to Texas Gun Rights today.

I know that’s a lot to ask, but the legislative session is underway RIGHT NOW — we must have the resources to fight and WIN!

But if $100 or $50 is out of the realm of possibility, I hope you’ll consider $25 — or you can even spread your activism out over time with just a $10 recurring donation today.

I’m sure you agree it’s crucial we keep our recent pro-gun progress from being erased.

No matter what you can (or can’t) afford, please sign your Oppose Marxist Gun Control petition today.

Thank you for all you do for the Second Amendment!